Collection of Indonesian Music and Artefacts

The Collection of Indonesian Music and Artefacts (CIMA) is a physical and virtual collection of field data from the various islands and provinces of Indonesia. It includes performing arts and cultural objects of many ethno-lingual groups, ranging from Sumatra in western Indonesia to Java, Bali, Kalimantan and West Nusa Tenggara in western and central Indonesia to Sulawesi, Maluku, East Nusa Tenggara and Papua in eastern Indonesia.  Our extensive collection of items from Sumatra is listed in a separate special collection, the Sumatra Music Archive. 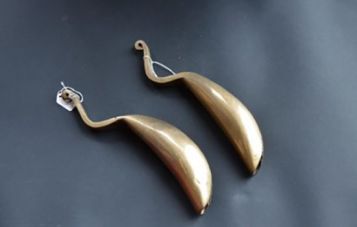 There are many Javanese and Balinese instruments, puppets, textiles and other art objects in MAMU including the rare kemanak (bronze concussion slabs) shown above from Central Java. 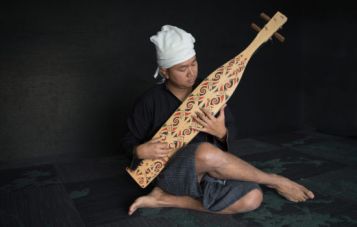 Kalimantan comprises four large provinces. The sape, a lute carved from a single tree trunk and measuring over a metre in length and shown above, is played by many of the upriver Kayan and Kenyah peoples of Central Kalimantan and Sabah. Sulawesi consists of six provinces. The alat bambu shown above is from the Manado area of North Sulawesi Province and comprises a pair of two slit bamboo tubes linked by a block of wood. 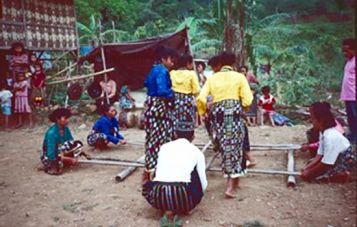 This region consists of two provinces, East Tenggara and West Tenggara. Each province contains a rich diversity of performing arts. 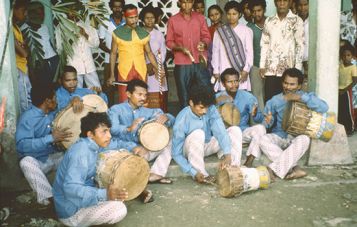 Encompassing the central and southern Maluku Islands in eastern Indonesia, this province is famed for nutmeg trees, spice-trading past and capital on the mountainous Ambon Island. 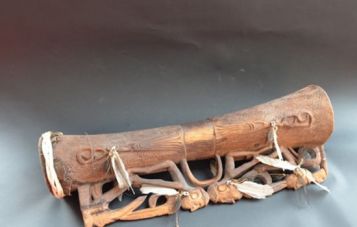 MAMU has collected musical instruments from the Asmat people of southern Papua including the kundu drum above.

The contents of CIMA reflects the many decades of collecting and recording activity by MAMU and comprises the traditional vocal and instrumental music, dances, theatre, bardic arts and martial arts of Indonesia and their associated properties, including musical instruments, theatre puppets, paintings, carvings, dance costumes and textiles worn at domestic and religious rituals and performances. Its audio and audio-visual recordings also include new music, dance and theatre items that are performed at festivals, competitions and on government and commercial occasions, in the media and in the streets and fair grounds. A large proportion of CIMA's holdings were acquired by staff and students of the Sir Zelman Cowen School of Music at Monash University in the course of ethnomusicological fieldwork in Indonesia from 1970 to the present day. 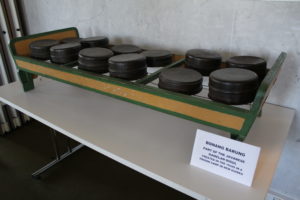 One of MAMU's most prized possessions. This one-of-a-kind gamelan was built in 1926 – from any materials at hand – by Javanese anti-colonial prisoners in a Dutch prison camp in West Irian (now Papua New Guinea) during Dutch rule of Indonesia. It was brought to Australia in the 1940s to promote Australia-Indonesia relations and support the Indonesian Independence movement. It was given to the Museum of Victoria in 1946, which donated it to MAMU in 1976.

Between 2008 and 2018, parts of the Gamelan Digul orchestra  were regularly borrowed by the Australian National Museum and displayed as an historical symbol of Indonesia's independence movement and the beginnings of Australian-Indonesian relations. (Image: a bonang [gong chime set] from the Gamelan Digul, where a wooden frame supports 12 pannikins instead of kettle gongs in two rows. Ethno-lingual group: Javanese). 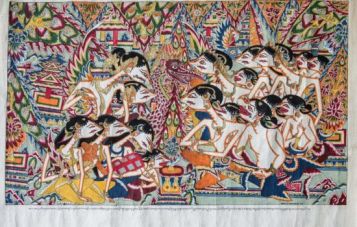 Cloth painting of wayang kulit figures, JSK Bequest (pictured above) The Jeune Scott-Kemball Bequest comprises books, slides, recordings, cloth paintings, puppets and other materials relating to Javanese musical art forms, including gamelan, theatre and dance. Before World War II, Australian scholar and collector Jeune Scott-Kemball (1914-1986) began her half-century association with the Department of Ethnography at the British Museum in London. Her strong interest in Javanese shadow puppet theatre led her to research the wayang kulit (leather puppet) set brought back to England by Sir Thomas Stamford Raffles in the early 19th century. Subsequently she published an illustrated book on the subject and donated her own collection of early wayang kulit, one of which was made and dated 1918, to the Music Archive of Monash University in the early 1980s. 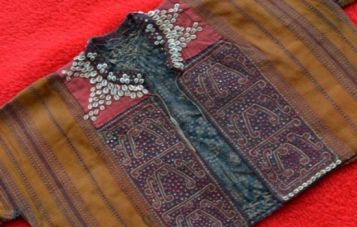 The John Noble Bequest of traditional textiles from most parts of Indonesia and a few specimens from India, Bangla Desh, Burma and Thailand was donated to MAMU in 2016 by the late John Noble through his partner John Thompson and the good auspices of Mr Sim Tan and Dr Michael and Marguerite Heppell. The majority of the textiles are from various parts of western, central and eastern Indonesia. Some are in fragile condition while others are more hardy, and most have been briefly catalogued. The cloths are wrapped separately in acid-free tissue and rolled on a roller, then placed on ceiling beams in MAMU’s Textile/Dark Room. Students and interns helped research and finalise the cataloguing of each specimen. MAMU presented the first Exhibition of select textiles from the John Noble Bequest as part of its International Conference and Exhibition of the Arts of Aceh in the Music Auditorium of the Sir Zelman Cowen School of Music at Monash University in September-October 2016.

The Museum of Indonesian Arts Inc. (MIA) and its individual members have collections of visual arts that complement the audio-visual holdings of MAMU.  MIA's exhibitions have displayed fine examples of textiles from most parts of the Archipelago, particularly Eastern Indonesia, as well as Javanese leather shadow puppets and dance masks; paintings on all sorts of materials from various parts of Indonesia (but mainly from Java and Bali); kendi (drinking water containers) from many parts of Indonesia; and treasures from Lombok and Sumatra, In recognition of their collaborative work, Australia’s federal government awarded MIA and MAMU a Community Heritage Grant in October 2014 to fund a project that would assess the significance of their holdings. The project outcome, announced through the National Library of Australia in Canberra in 2015, deemed that MIA and MAMU have Collections of National Significance.

MIA is an independent, not for profit, incorporated organisation with a Committee chaired by Halina Nowicka, while the Music Archive of Monash University is a unit within the Sir Zelman Cowen School of Music with an Advisory Board chaired by Professor Sharon Pickering (the Dean, Faculty of Arts), Margaret Kartomi (Director) and Bronia Kornhauser (Archivist).