MAMU’s Northeast Asian Collection comprises instruments, scores, field recordings, books, textiles and other artefacts from the music cultures of China, Japan and Korea. Music staff and graduate students have been collecting physical and digital musical materials from these countries since the 1970s. 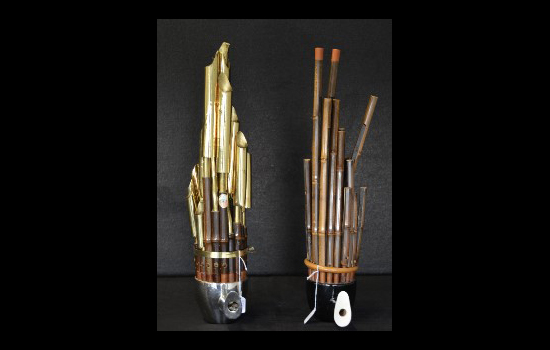 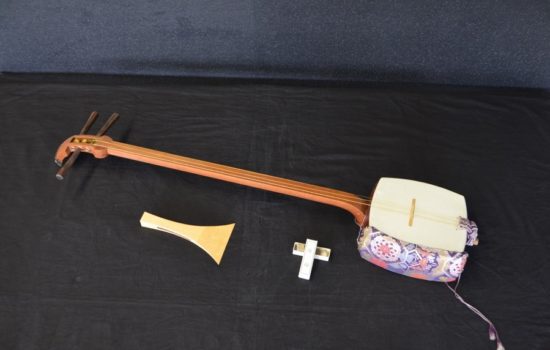 The Chinese holdings are mainly recordings and musical instruments that include two Sheng (bamboo wind instruments), bamboo flutes, a collection of bowed instruments related to the Erhu (two stringed bowed fiddle), plucked stringed instruments such as the pipa and ruan, and percussion such as the qing (fish-shaped rattle)

The Korean collection consists mainly of orchestral, instrumental and vocal scores, CDs, DVDs, books, journals and material relating to the development and performance of Korean composers’ works from the 1960s to 2005.

The Sheng is composed of a dozen or more bamboo pipes of different lengths attached to a hollow base that includes a protruding mouthpiece.  The base, made of wood or metal, acts as a resonator. Ancient instruments similar to the Sheng are considered to date from the Han Dynasty.

The Erhu, a two-stringed bowed Chinese fiddle, is made of wood and has a bow of bamboo and horsehair. The horse hair is threaded between the two strings.  A musician holds the erhu vertically on his/her thigh during performance. Two tuning pegs are attached to the upper part of a long thin neck that continues through and juts out of the body of the short tube-shaped resonator at the lower end of the instrument. The front of the resonator is covered with snake skin, which vibrates when the erhu is bowed. Each string stretches from the pegs to the base protrusion, a loop of thin cord near the body keeping them in place.

In the 1930s and ‘40s the influence of Western music and styles of performance on Chinese music resulted in the emergence of large folk instrumental ensembles with a broader sound range similar to a Western symphony orchestra. To cover this wider  soundscape varying sizes of instruments, such as the bowed Zhonghu (pitched lower than the erhu)and the plucked Ruan were introduced. The Ruan has a long neck, four strings and a fretted fingerboard. Its resonator is a flat wooden box shaped like a full moon with half moon sound holes. Nowadays it has three sizes, the Zhongruan (medium ruan) being the most popular. 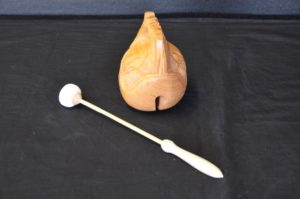 The Shamisen is considered to have evolved from the Chinese Saxian, has the facility to be percussive and melodic simultaneously, and is known for its use in Japanese theatre.

One of the most well known Japanese instruments, the thirteen stringed Koto, was originally of Chinese origin but became popular among aristocrats when it was introduced to Japanese society around the sixth century. Over time, the Koto’s structural developments, performance practices and repertoire have made it Japan’s national instrument. Moveable bridges give a Koto player the flexibility to adjust tunings as required to produce a variety of sounds.

Japanese Buddhist Chimes, used in temples, are struck with a wooden or metal hammer to summon the gods and beseech them for protection.