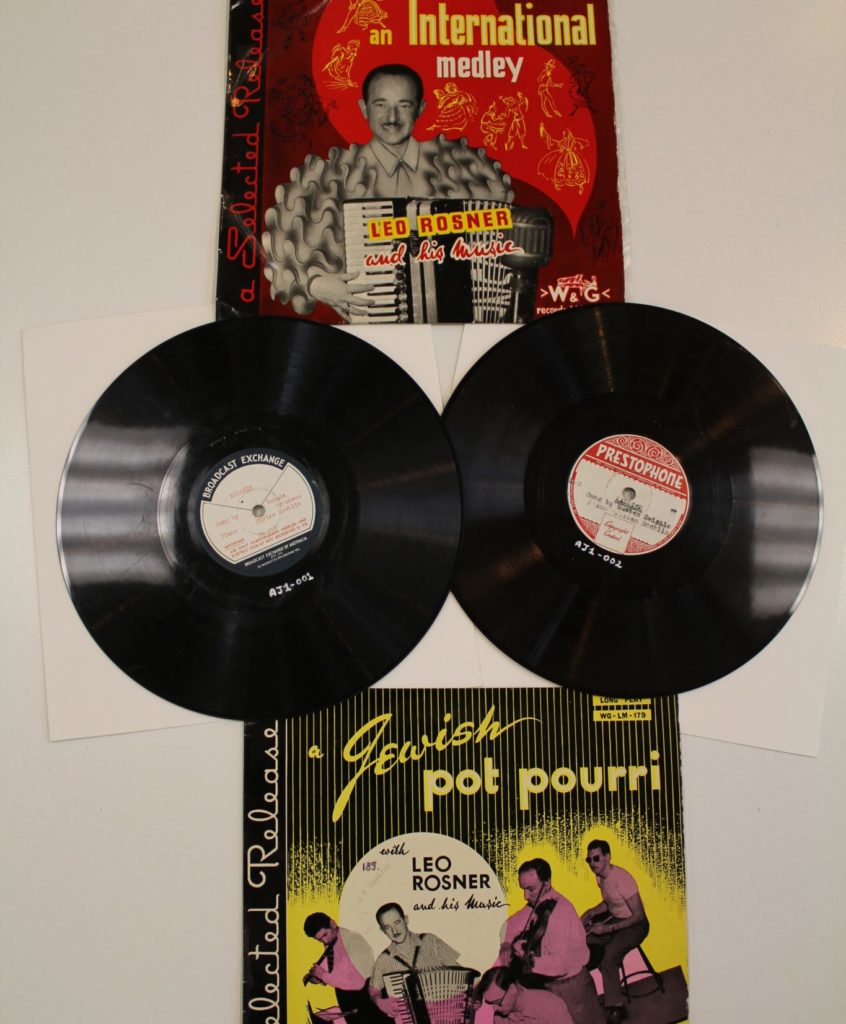 The Australian Archive of Jewish Music (AAJM) is the only archive in the world concerned exclusively with sound, visual and bibliographic materials on the musical cultures of Jewish communities and individuals in Australia and South, East and Southeast Asia.

The AAJM was established at Monash University in 1994 under the umbrella of MAMU. While there are Jewish music archives in various parts of the world, the unique quality of the AAJM is its focus on Australia and South, East and Southeast Asia. Collection-building, networking and research has thus far seen the accumulation of over 1000 vinyl discs (78rpm, 45rpm and 33 1/3rpm), hundreds of audio tapes (reel-to-reel and cassette), videotapes, CDs and DVDs, field recordings of interviews and performances, sheet music and scores, and a plethora of documents, nearly all of which fall within our geographic purview. The AAJM has also accepted donations of musical instruments. Most of our material has been donated or bequeathed by members of the Jewish and wider communities, the result being an eclectic mix of styles and genres, including Klezmer, folk, liturgical and paraliturgical music, Jewish popular and art music, popular and art music presented by Jewish performers, Chassidic music, Holocaust songs, and more. In 2002, the AAJM produced the compilation CD Ta’am as a means of presenting some examples from its sound collection to the general public. The songs and music chosen have an Ashkenazi slant (that is, of Central and East European heritage) and were all performed in Australia. Five years later, the AAJM compiled and produced another CD titled Out of Babylon, which contains mainly Judeo-Babylonian songs performed in Australia, Iraq, Israel, India Singapore Hong Kong and Shanghai.

A collection of certain audio files are available online covering pre-1950 recordings of Hebrew and Yiddish songs and performance representative of Jewish music culture in Australia. 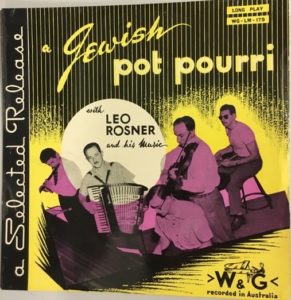 The vast majority of collections in the AAJM are named by donor or bequest. They may comprise miscellaneous records bought and enjoyed by private individuals who no longer have the equipment needed to play them. To date the largest of these is the Malka & Pinek Krystal Collection donated in 2000 and numbering over 350 recordings, as well as books and songbooks, scores and sheet music. In other cases, they may also include the donor’s own performances, as illustrated by the Abraham Adler Collection. Cantor Abraham Adler (1916-2003) was appointed to lead services at Melbourne’s Elwood Hebrew Congregation from 1958 till 1975, thence moving to Vienna to fill the post of Chief Cantor of Vienna’s Jewish Community. During his time in Melbourne, Cantor Adler had guest spots on radio 3DB where he sang live and was interviewed several times within the span of a decade. He also produced recordings of liturgical songs and was accompanied by the likes of Felix Werder and Leo Rosner, these two musicians having their own collection listings in the AAJM.

Cantor Adler donated the radio shows and his recordings and also his notations to the AAJM on an ongoing basis, and continued to do so after he left Australia. This proved to become valuable resource material leading to a thesis on the Cantor by Kerryn Hankock, an alumnus of the Sir Zelman Cowen School of Music. 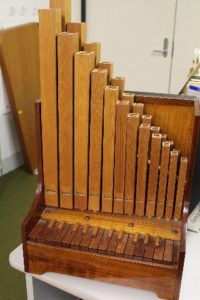 Some of our collections are very wide-ranging reflecting the interests and activities of the person who had owned the material, as is the case with the Nechama Patkin Bequest (received in 2010). Nechama Patkin (1939-2010) was a renowned national and international concert pianist, a passionate teacher of music and an enthusiastic advocate for using the Suzuki method of music tuition, a ballet repetiteur, a lecturer at the Victorian College of the Arts, a television and radio broadcaster, one of the first presenters of Playschool on the ABC, and a regular organiser of, and performer at, Jewish community functions in Australia. The items in her bequest include boxes of records, tapes, scores and sheet music of Jewish songs, concert programs, photographs, books, articles, posters and various sized billboards advertising performances, and instruments she collected during her travels.

Other organisations have benefitted from Patkin’s legacy; for example, the Suzuki portion of her bequest was donated to Suzuki Music’s Victorian branch. Further AAJM holdings of note include but are not limited to the George Dreyfus Collection (George Dreyfus is an esteemed Australian composer and performer), the Miriam Rochlin Collection (Miriam Rochlin was accompanist par excellence for any performances of Yiddish plays and concerts from the 1920s to the 1970s in Melbourne), the Ben Segaloff Bequest (Ben Segaloff was conductor, arranger, and scholar of Jewish choral music and authored the monograph Jewish Choral Music in Victoria), the Geoffrey Orr Collection (Geoffrey Orr tracks down sound recordings that have become extremely rare, digitises them for posterity and generously donates relevant copies to the AAJM), and the Freydi Mrocki Collection (Freydi Mrocki is part of Klezmania, a Melbourne Klezmer group established in the 1990s and her collection includes Klezmer rehearsal and performance tapes). Anyone interested in these and other collections in the AAJM are welcome to browse the premises.