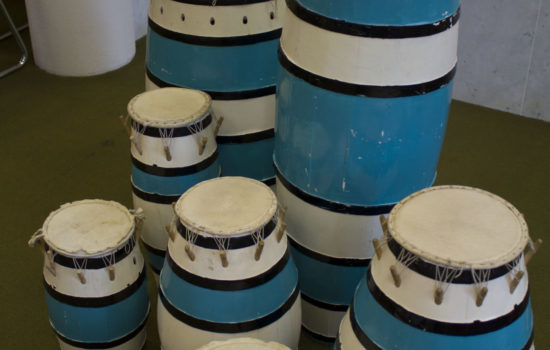 The African continent comprises over 50 countries and more than twice that number of ethno-lingual groups. MAMU’s small but growing African collection includes sets of drums and gourd rattles of the Anlo Ewe people, who inhabit the Southeastern corner of Ghana in West Africa. Their music is mainly percussive and rhythmically complex. A fundamental aspect of their culture is dance-drumming in which everyone must participate. The set of drums housed at MAMU are single-headed, barrel-shaped and decorated in a paint pattern that includes the regulation blue colour (current in the 1990s) of Monash University.

Other parts of the African continent are represented in MAMU’s sound collection.  We have a number of 33 1/3rpm vinyl disc recordings that include music from Tanzania (East Africa), Angola (Southern Africa) and Nubia (North Africa). In addition, the research arm of MAMU’s collections includes theses with a focus on African music, for example `"We just want to play African music": the objectives, approaches to creativity and result of musicians recreating African popular music in Melbourne’ by Sally Woods in 1990; ‘The influence of the jali tradition on contemporary West African popular music’ by Graeme Counsel in 1996; and more. 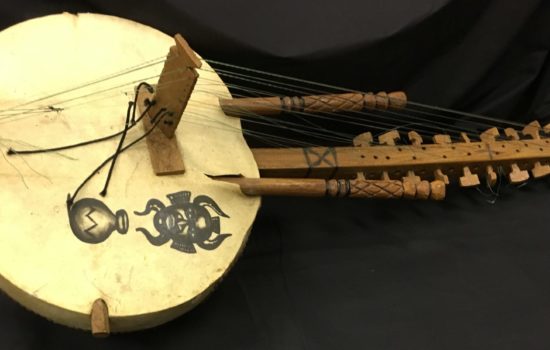 MAMU’s kora, or African harp-lute, stems from Gambia, West Africa, but may be found in other parts of the African continent. Our instrument has 18 of its 21 strings secured to the long neck and wound around the tuning pegs. From the neck, they slide through slits in a tall bridge attached to its large gourd body and are secured at the head to a metal loop. Animal skin, decorated with traditional designs, covers the body which has a sound hole at the side for resonance. The kora has a 3-octave range and is usually played at social gatherings to accompany singing and dancing.