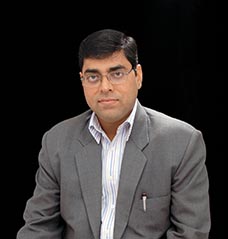 Ajay Navaria  is the author of two collections of short stories, Pathkathaauranyakahaniyan (2006) and Yes, Sir (2012), and one novel, Udhar ke log. A collection of his short stories, translated by Laura Brueck into English and published as Unclaimed Terrain (2013), has won critical acclaim. Renowned Pakistan writer Mohammed Hanif  has hailed Navaria as an important voice:“Navaria is a master storyteller. I am not sure if new India ever realised that it needed a new Premchand, but in Navaria India has got one.” A review in the Hindustan Times spoke of how Navaria turns the light on a set of people who don’t usually figure in our English language inquiries. The writer and critic Pankaj Mishra listed Unclaimed Terrain among the best books from India in 2013 in a feature in The Guardian.

Born in 1972 in New Delhi, Navaria works as Assistant Professor in the Department of Hindi, Jamia Millia Islamia University, Delhi.He has also played a key role in debates around not just the aesthetics and politics of Dalit Literature in Hindi but has been an important player in Hindi literature as such. While the focus of his writing remains on the experience of caste, Navaria is among the few Dalit writers who has been able to portray with poignancy and empathy the lives and experiences of non-Dalits as well. His characters—ranging from a Brahmin peon to a Dalit male prostitute—are neither black nor white, neither clearly good nor evil. They inhabit a grey zone, lingering in the transitional passageway between past object and future subject, casteism and democracy.

That Navaria straddles both the Dalit and non-Dalit worlds with equal ease finds testimony in the fact that he has been associated for over a decade with the premier Hindi literary journal, Hans, while at the same time given the significance of his contribution to Dalit literature, he was recently elected chairperson of Bhartiya Dalit LekhakSangh ( Indian Dalit Writers Association).

Navaria has won several literary prizes and awards, has delivered lectures at national and international conferences, and was invited to the Jaipur Literature Festival in 2010 and 2013.