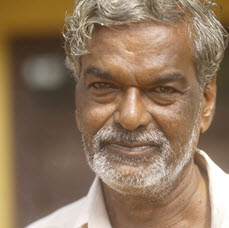 DEVANOORA MAHADEVA emerged as a major literary voice in the  1970s, which also saw the emergence of the Dalit Movement. Mahadeva’s short stories collected in Dyavanuru (1973) broke new ground introducing themes anchored around the life of Dalits. His innovative narrative techniques swerved away from the modernist modes current at the time.

The novella Odalaala (1981) was instantaneously rec-ognized as a classic in the manner it brought together an inwardness to the Dalit life-world. Done with a great degree of compassion, Odalaala never fails to create humour and a language which drew on the poetic possibilities of a living dialect of an oral tradition.

Kusumabale (1988) is a milestone narrative that weaves together many tales told in many voices and modes all of which speak with love, irony, and compassion. The work takes us into the depths of this world where its unique language, gestures, stories, and rituals represent a self-suffi cient counter cosmos.

Born in Chikka Kavalande village in Nanjangud taluk of Mysore district in 1948, Mahadeva received his Masters in Kannada literature from Manasagangotri, Mysore University. He is the recipient of many awards, including the Central Sahitya Akademi award, Padmashree, Allama, Bodhisatwa, and D.litt from the University of Mysore and ‘Nadoja’ from Kannada University, Hampi. He lives in Mysore and is closely associated with most of the people’s movements in Karnataka.