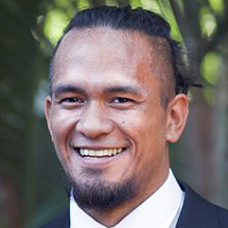 Brenton is a young indigenous writer/Illustrator from Broome, in the far North West of Australia. Ever since he can remember, Brenton has been passionate about art and telling stories. He first developed his love of comic books and this style of drawing when he was very young.

Since then, Brenton has been immersed in the world of comic art, cartooning and graphic novels. He is inspired by the multicultural history of his hometown and draws on Aboriginal and foreign mythologies in his stories.

Brenton studied visual arts for two years at Goldburn TAFE and in 2009 was one of twenty successful applicants to be awarded a highly sought after mentorship with the Australian Society of Authors. Brenton was a Deadly Award nominee in 2011, guest panelist at Dromkeen Literary Lunch for Graphic Novelists and winner of Kullarri  NAIDOC award for Literature.

In a dusty pearling town in the north-west of Australia, runs Ubby, a young ruffian who leads a rag-tag gang known as the Underdogs.

When Ubby meets Sai Fong, a Chinese girl just off the boat from Shanghai, she finds herself thrown into a world of ancient legends and secrets never before exposed. Ubby is on the brink of becoming a hero unlike the world has ever seen, and must walk where most men dare not tread.