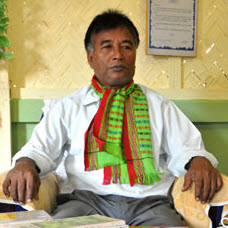 Chandrakanta Murasingh is one of the leading poets of Kokborok, a language spoken by a large number of indigenous people. He was born at Tuiwandal, a remote village of Tripura on 1st April, 1957. He works with a Bank and now resides in Agartala. He has seven titles of collection of poems to his credit. English version of a considerable number of his poems found room in “Indian Literature”, the Journal of Sahitya Akademi and in “Anthology of contemporary Poetry from the North-East” published by NEHU and also in anthologies published by Oxford University Press and Penguin Books. He was awarded Bhasa Samman Award by the Sahitya Akademi, Delhi. Tripura State Government awarded him Rabindra Puraskar. He received “True Legend of North-East India Award” from the Telegraph Group. He participated thrice in the National Poetry Festival of Bangladesh. Picturisation of the hilly life with all of its struggle, distress, frustration and happiness with the sense of Unity is the glory of his poems. A hundred of his poems in Hindi translation have been published by the Presidency University (Calcutta).