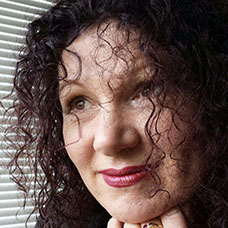 Jane Harrison is a descendant of the Muruwari people of NSW. She is a playwright/writer and a researcher/policy maker. Her award-winning play Stolen has been performed in Melbourne, Sydney, Adelaide, Tasmania, WA, the UK, Hong Kong and Tokyo, with readings in Canada, New York and Los Angeles. Rainbow’s End premiered in 2005, has had a Tokyo production, toured throughout Australia in 2011, winning the Drover’s Award for Tour of the Year. Her most recent play, The Visitors, was part of the MTC Cybec Electric series and the Melbourne Indigenous Festival in February 2014. Her teenage novel Becoming Kirrali Lewis was published in June 2015 and won the 2014 Black & Write! Indigenous Writing Fellowship. Jane was Festival Director for Blak & Bright, the first Victorian Indigenous Literary Festival in 2016. Jane’s other publications include Indig-curious; who can play Aboriginal roles? (2012).