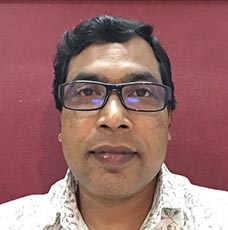 Venkat Raman Singh Shyam (b.1970) belongs to the tradition of Pardhan Gond art inaugurated by the legendary Jangarh Singh Shyam, his uncle. After apprenticing with Jangarh in the 1990s, Venkat worked a range of jobs—including as house painter, screen printer and signboard artist. He also was fortunate to be guided by the pioneering Jagdish Swaminathan. Since Jangarh’s death in 2002, Venkat has pursued a full-time career in art despite several hurdles. Having travelled and exhibited widely in India, the US, Canada and Europe, Venkat has been exposed to a wide range of arts practices which have influenced his sensibility.

While continuing to harness the Pardhan Gond method of pointillistic detailing established by Jangarh, Venkat also has honed the ability to draw figures that aspire to realism: the elephant may look quite real, but drunk on mahua, it flies, and it is adorned with flowers. In him, the contemporary global world and the demands it makes have learnt to cohabit with a sensibility that invokes a primitivism that is at once modern, and reminds us of the world we all come from. Art, for Venkat, is both an escape from and a grappling with the harsh realities that become a part of our existence. Even as he remembers myths and legends that are being overrun by the surfeit of information in this electronic age, he reminds us that the world has barely changed, that time is not linear, that art can still produce magic.

Venkat’s graphic autobiography, Finding My Way, coauthored with S. Anand, will be published in April 2015.