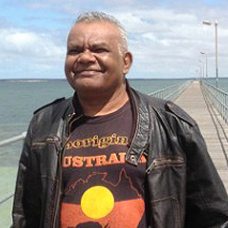 Lionel Fogarty has given voice to Aboriginal poetry for over thirty years and is one of Australia’s most respected and radical Indigenous poet and political activists. Born at Baramba, now known as Cherbourg Aboriginal Reserve, he was raised under the apartheid Queensland Aboriginal Act.

Since the 1970s he has been active in many of the political struggles of the Aboriginal people, particularly in southern Queensland, from the Land Rights movement, to setting up Aboriginal health and legal services, to the issue of black deaths in custody – Fogarty’s own brother, Daniel, died in police custody in 1993.

Lionel’s first book Kargun was published in 1980, providing an essential voice to the human rights struggle of his people. Over his long career, he has published twelve volumes of poetry, as well as a children’s book, Booyooburra, a traditional Wakka Wakka story. His most recent works include Minyung Woolah Binnung: What Saying Says (Keeaira Press), Mogwie Idan (Vagabond Press) and Eelahroo Nyah MoBo MoBo (Vagabond Press).

His poetry expresses the need for innovation and urgency. In doing so, it is sometimes surreal, sometimes confronting and includes large amounts of Mununjali / Yugumbeh dialect and vernacular.In 2012, he won the Scanlon Award for Connection Requittal, and in 2015 Lionel won the Kate Challis RAKA Award for Best Book of Aboriginal Aust. Poetry. In 2016 Lionel is invited to attend the worlds first Indigenous Poetry Festival in Mexico.

Lionel has travelled throughout the world seeking justice for Deaths In Custody and remains a passionate mentor to young Aboriginal writers in remote regions of Australia.