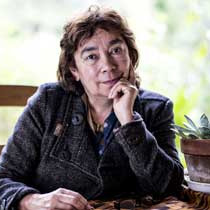 Alexis Wright is regarded as one of Australia’s finest living writers.  A member of the Waanyi nation of the Gulf of Carpentaria, Alexis has worked for Aboriginal concerns and rights in Australia over many years. Her most recent novel The Swan Book was described by leading Australian Literary Critic, Geordie Williamson, as one of the most beautiful, furious and urgent novels to be published in this country in recent years. The Swan Book is set in a near future Australia, although it has been called a planetary novel, and concerning the entire Earth. The novel recently won the Association for the Study of Australian Literature (ASAL) Gold medal, and was shortlisted for major literary awards in Australia, including the Miles Franklin Award.  The book is being published in UK and France, and translated in Chinese.

Her previous novel Carpentaria won five of Australia’s most prestigious literary awards in 2007, including the ASAL Gold Medal and the Miles Franklin Award.  The novel maintains the interest of scholars throughout the world, and was published in the UK, US, France, Italy, Poland, China, and recently in India by Navayana.

Her first novel Plains of Promise was shortlisted for the Commonwealth Prize and is still studied internationally in universities and schools.  The other books are Grog War, a study of alcohol abuse in Tennant Creek, the short story collection Le Pacte de Serpent, and as compiler and editor for Take Power, a collection of essays and stories remembering the first twenty years fight for land rights in Central Australia.

Alexis is a Distinguished Fellow in the Writing and Society Research Centre, University of Western Sydney.