On the first Sunday of each month from 2–4pm in the Monash MPavilion, the performing arts of the Asian and First Nation Peoples who live in the Monash Clayton area will be performed.

This year the focus is on the music of Iran, Afghanistan, India, Indonesia, China, Japan, Malaysia, Vietnam, Srilanka and Australian indigenous communities.

The first event, on Sunday 3 March, was a Concert and Exhibition Launch of Musical Instruments and Artefacts from Iran and Afghanistan by Dr Gay Breyley. It attracted more than 130 people in the audience comprising all ages, including international students living on campus, and members of the Iranian and Afghan communities living in Dandenong, Caulfield and nearby suburbs.

The Iranian items were led by Music double degree student Sahar Pakravan and the Pakravan Ensemble, and included some beautiful Sufi-inspired female dances, including some by Iranian children. The Hazaragi musician (from Afghanistan), Ustad Khair Ali Shahristani, improvised 30 minutes of plucked string dambura music which was extraordinarily brilliant. The poetic lyrics of the love songs he sang were
translated for the audience by Najib Mohammadi.

MAMU Archivist Bronia Kornhauser and the MAMU team presented the event, including an Exhibition Catalogue containing photos and descriptions of the exquisite instruments borrowed from the Iranian and Afghan communities in the Gallery in the Music Auditorium Foyer in the Performing Arts Building.

For a schedule of the MAMU and MPavilion events please visit https://www.monash.edu/mpavilion 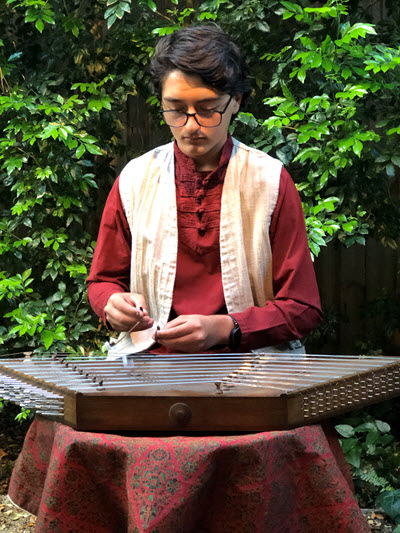