A large-scale Monash University study has revealed the major causes of serious injuries on Victorian roads.

The Enhanced Crash Investigation Study (ECIS), conducted by the Monash University Accident Research Centre (MUARC) and funded by the Transport Accident Commission (TAC), gained unparalleled access to 400 seriously injured drivers to understand the factors and severity of their crashes.

The crashes were drawn from across the state and occurred between August 2014 and December 2016.

Each crash was examined in forensic detail, with research nurses interviewing the drivers or their families following admission to The Alfred or Royal Melbourne Hospital. Crash investigation teams also inspected the scene of each crash and the vehicles involved.

The injuries suffered by people involved in these crashes were severe and required extensive medical care. Drivers spent an average of 8.6 days in hospital with 40 per cent requiring additional time in a rehabilitation centre.

“This is the start of a different and life-changing journey for many, with extended time off work being common and being unable to do the things we take for granted no longer being possible,” MUARC chief investigator Associate Professor Michael Fitzharris said.

Impact speed was shown to play a significant factor in injury severity, with serious injuries more common in crashes that occurred on lower quality roads with higher posted speed limits.

“Our research team saw first-hand the effects of high-speed crashes. The research also shows the limits and inability of vehicles to protect drivers from serious injury in high speed crashes. The need to create safe roads by matching speed limits to the road infrastructure is critical,” Associate Professor Fitzharris said.

The study shows that in 45 per cent of crashes, the involved driver(s) had no time to brake. For the 55 per cent of crashes where a driver braked, they did so for 1.3 seconds on average. “This result highlights the split-second nature of crashes and the need for safe vehicles and safe roads.”

The study examined over 180 possible contributing factors for crash, with crashes being meticulously reconstructed using sophisticated 3D software. The study found that exceeding the speed limit by just 3 km/h increased a driver’s crash risk by 25 per cent.

Exceeding the speed limit was the most common non-compliant behaviour from drivers in ECIS crashes (26.2%), followed by the presence of alcohol or drugs (19.1%) and the disregarding of instructions including stop signs and traffic lights (13.7%).

A range of other driver performance factors were found to have played a role in the crash, including driver error, while the effects of medical conditions (14.5%) and physical health and acute illness (5.6%) were also seen to have contributed to crash occurrence. Driver drowsiness was seen in 25 per cent of all crashes and was higher in run-off-road crashes. The study also found that mental health and psychological distress played a role in 12% of crashes occurring.

Injury severity was classified according to the Association for the Advancement of Automotive Medicine (AAAM) Abbreviated Injury Scale (AIS). Injuries rated as ‘3’ or higher (up to 6) were defined as ‘serious’, and involved drivers being admitted to hospital. Injuries in this category included loss of consciousness for up to six hours, injuries to the kidney, and liver and femur fractures. ECIS crashes were very severe, with half of the drivers suffering serious injuries that were rated as AIS 3 or higher.

The probability of sustaining this level of trauma was associated with impact speed, showing that speed not only increases the risk of being involved in a crash but is directly linked to the type and severity of injuries. At a 60 km/h impact speed, the risk to the driver of suffering a serious AIS 3+ injury is 50 per cent in a frontal impact crash.

Vehicle age was an important factor associated with injury severity. Safety features, especially airbags, were lacking in older vehicles, while seat belt non-use also contributed to higher levels of injury. Nearly half of drivers were trapped in their vehicle due to the amount of vehicle crush, requiring extensive support from emergency services personnel.

Drivers of newer vehicles holding a five-star ANCAP safety rating fared best with the lowest proportion (17.2%) of drivers being seriously injured. These results highlight the importance of drivers having the safest car possible and a continued focus on improving vehicle safety for all road users. For drivers of cars with a safety rating of three stars or lower, more than half were seriously injured.

“What we saw was that even for the nearly 60 per cent of crashes where the involved driver(s) met all the criteria of being a Safe Driver, crashes still occurred and drivers were seriously injured,” Associate Professor Fitzharris said.

“This shows the need to focus on long-term sustainable solutions that will protect drivers from being seriously injured when crashes occur. Clearly though, immediate actions including measures to improve driver compliance and those focused on reducing the speeds at which vehicles crash is needed.”

The goal of ECIS was to identify measures that can be ‘scaled up’ across Victoria, which could prevent serious injuries in the future. With lessons from Sweden and use of the Safe System approach that underpins Australia’s road safety strategy, identifying the requirements for Safe drivers, Safe vehicles and Safe roads was a key part of the study.

“Our findings show that the potential to reduce the number of drivers and passengers injured on Victorian roads is significant. Ultimately, with the right settings, the study shows that eliminating serious injury from crashes is possible. This is an important finding of global significance,” Associate Professor Fitzharris said.

With over 6,000 people hospitalised following a road crash in Victoria, 62% of which are drivers and passengers of cars, the insights from the ECIS program have potential to benefit many Victorians and protect all road users. 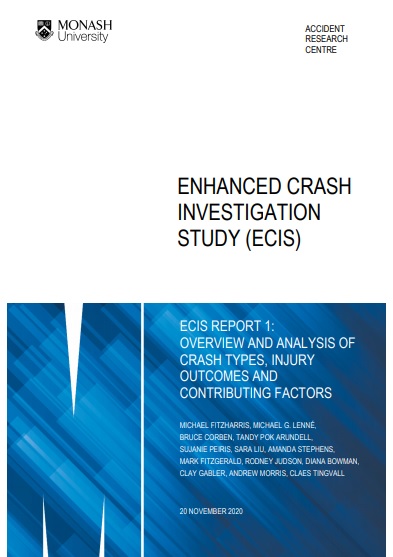 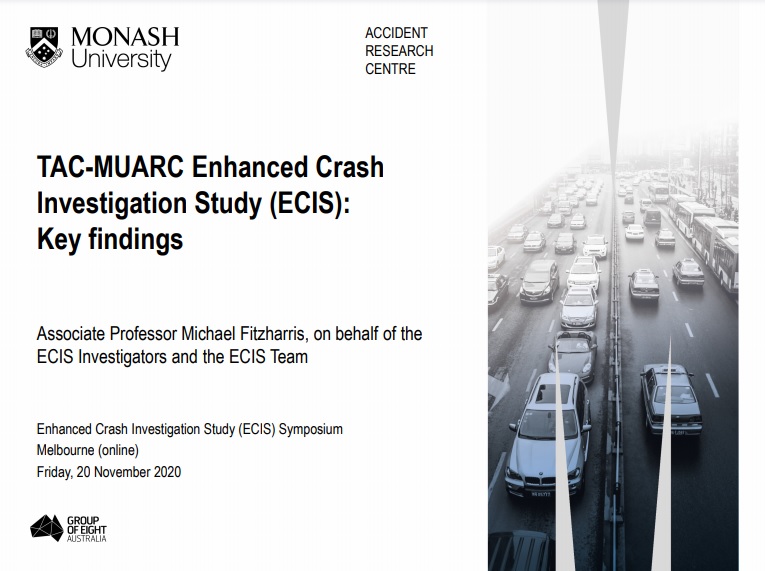