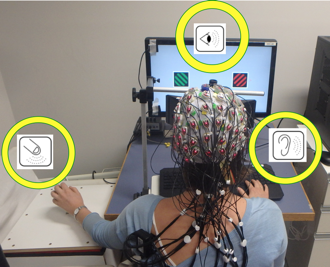 Are we aware of everything we pay attention to?

Even when we focus our attention on a single object, we experience periods of high and low focus that alternate many times per second. These rapid changes in attention – known as attentional sampling – are imperceptible to us, but allow our brains to capture information about the surrounding scene and enhance it for analysis.

As this phenomenon was only discovered relatively recently, researchers are still trying to understand it. Matthew Davidson, a PhD student with Nao Tsuchiya at Monash University, and his colleagues wanted to investigate whether attentional sampling occurs during binocular rivalry – a visual illusion where each eye is shown a different image at the same time.

During binocular rivalry, instead of us seeing a fused picture of two images, what we see involuntarily switches back and forth between each image. While we’re conscious of one image, the other image is suppressed from our consciousness and seems invisible.

The researchers used Monash Biomedical Imaging’s electroencephalography (EEG) facilities to record the brain activity of 34 people while they viewed images during a binocular rivalry task. The participants reported which image they were conscious of seeing while their attention was directed by sound or touch towards one of the images.

The researchers found evidence – from both the EEG recordings and the participants’ reports – that attentional sampling exists during binocular rivalry. Their results showed that when participants paid attention to the invisible, nonconscious image, their attention was actually divided between both images. This suggests that we may not be conscious of everything we are paying attention to.

This study helps us understand how attention is focused and diverted, and how it interacts with what we consciously perceive. It also adds to other ARC Centre of Integrative Brain Function research – from Nao Tsuchiya’s lab and Jason Mattingley’s lab at the University of Queensland – demonstrating that attention and consciousness are not the same.

The researchers’ next steps are to locate where in the brain the relationship between attention and invisible visual information is strongest, which could help them to understand which parts of the brain are responsible for human consciousness.

This article originally appeared on The Brain Dialogue. Read the original article https://www.cibf.edu.au/our-attention-can-jump, available under CC-BY 4.0