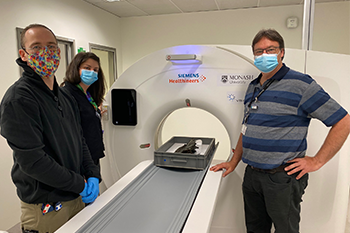 Computer Tomography (CT) scans of a 67-million-year-old Triceratops were used to create an immersive digital experience as part of the dinosaur’s exhibition at the Melbourne Museum.

Data from the scans produced by Monash Biomedical Imaging’s large bore Siemens CT scanner will also be digitally archived and maintained by the Museum.

Tim Ziegler, Collection Manager, Vertebrate Palaeontology from the Melbourne Museum, said it was important to scan the dinosaur to capture as much data as possible before it was assembled for display at the Museum. “By digitising rarely seen aspects of the Triceratops, we can make data available to the worldwide scientific community, enabling further study of this remarkable dinosaur,” he said.

Although CT imaging is an essential part of modern palaeontological research, this is the first time a fossil of this size has been scanned at Monash Biomedical Imaging.

Hazel Richards, a Monash University PhD student who conducted the CT scans and built 3D assets of the Triceratops, said CT scanning allowed researchers to visualise the internal aspects of the dinosaur.

“When we combine the internal images produced by CT scans with the external surface scan images, we can create a complete 3D model of the Triceratops bones that allows us to research a range of evolutionary questions,” she said.

“Fossilised bone is very dense so our scanning challenge was to manipulate the CT settings so that the X-Rays would penetrate the bones allowing visualisation of internal structures such as the dinosaur's brain case,” Dr de Veer said.

“Different parts of the dinosaur fossil were scanned over a number of visits, and the bones were transported in special crates to reduce the possibility of damage. As the CT scanner can penetrate plastic and foam, we were able to keep the bones in their protective stillages during scanning,” he added.

During one visit, the team scanned the upper and lower jaws along with its battery of nearly 800 teeth. This data will help researchers to investigate why this herbivore dinosaur had so many teeth and what it ate.

Discovered in Montana, USA in 2014, the Triceratops was excavated over two field seasons and prepared in Canada before Museums Victoria acquired it for the State Collection.