There were times in his life when it seemed Professor Richard Gunstone was born to challenge convention. He struggled to complete his university degree in science, yet somehow managed to mature into one of the giants in his field. 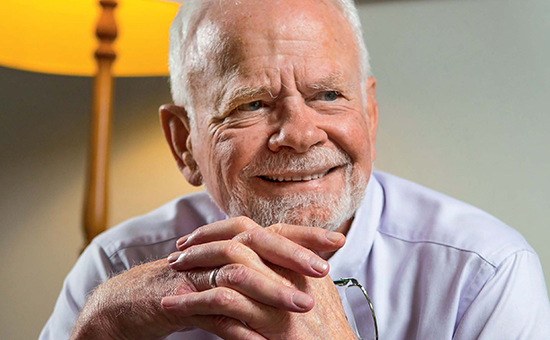 He has taught science education to thousands of students who passed through the halls of Monash University during his career of more than 30 years and has also taught in universities overseas. He’s supervised some 42 PhD students including the current Dean of Education, Professor John Loughran, and the Director of Education Futures, Professor Deborah Corrigan.

It’s been a career that has exceeded his expectations on so many levels.

Professor Gunstone achieved his one and only ambition when he walked onto the grounds of the University of Melbourne as a fresh-faced student of science in 1958.

An only child, he was the first of his mother’s extended family – which included 45 cousins – to finish high school, let alone enrol in university.

If he felt a burden of responsibility or expectation, he carried it lightly.

It took him five rather than three years to complete his degree. When he eventually joined the workforce, he was surprised to find he had a passion for teaching.

He ended up teaching science, physics and mathematics for 12 years in four Victorian high schools, including Lake Bolac College and University High School. In the last two years of teaching high school students, he also worked in part-time teaching methods programs in the Faculty of Education at Monash University and joined there full-time in 1974.

He didn’t leave until 2005 and then only for a few years to care for his wife, Margaret, who was battling cancer.

His early years at the University’s Faculty of Education were groundbreaking. “I lucked into what was the strongest science education group in the world at the time,” he recalls.

Peter Fensham had been appointed to the Chair of science education, the first appointment of its kind anywhere outside the US, and he created a strong culture in science education research.

By 2005, when Margaret became seriously ill, Professor Gunstone decided to retire from work to care for her. They had been married for 45 years when she died in 2008.

He was left bereft but science education offered him a lifeline he returned to Monash as Emeritus Professor of Science and Technology Education.

“It helped enormously with the grief,” he recalls. “It was a very fortunate way for me to re‑engage with life.”

Now 77, an age at which many have sought the greener pastures of retirement, Professor Gunstone continues to buck convention.

He’s actively involved in his research and development work as well as mentoring science education academics at Monash.

It’s in this spirit of gratitude that Professor Gunstone wants to leave a bequest to partly fund a scholarship for a PhD in science education. He had discussed it with his wife before her death and it has the support of their two sons, Andrew and Tim.

His motivation is simple. “I want to help a future generation of science education researchers,” he says.

If you’d like to find out more about leaving a gift to Monash in your will, please contact Gillian Dodgin, Senior Planned Giving Manager, on (03) 9903 4395.

“I’ve had a crazily outrageous and wonderful career,” he says. “And I owe so much of it to Monash University.”