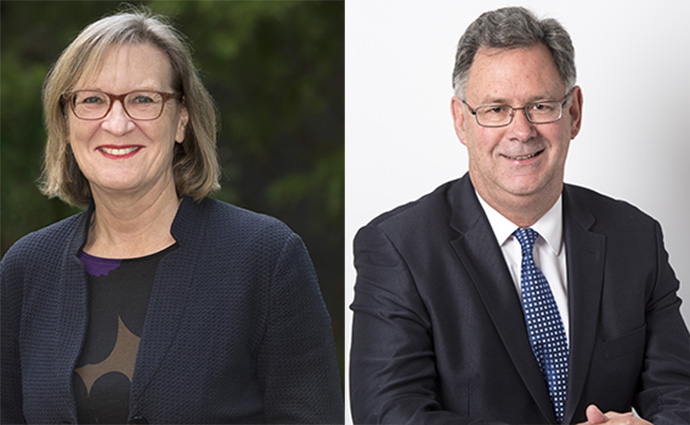 Two Monash Biomedicine Discovery Institute (BDI) researchers have been recognised by election to the Fellowship of the Australian Academy of Health and Medical Sciences (AAHMS).

Professors Gail Risbridger and John Bertram have joined the ranks of AAHMS Fellows, elected by their peers for distinguished achievements and exceptional contributions to health and medicine.

Professor Risbridger is an international leader in prostate cancer and men’s health, whose work with patient-derived xenografted specimens bridges the gap between basic science and clinical trial. This world-class program leads or is incorporated in global alliances including the United States Department of Defense partnership and Movember Global Action Plan. Professor Risbridger serves on governance bodies including Cancer Council Victoria and was a leader in development of the first National Male Health policy.

“I couldn’t have got this award without the contributions of the very dedicated group of people who work with me and the many prostate cancer consumers/patients for whom we seek to identify and understand what makes prostate cancer lethal and ways to treat it,” Professor Risbridger said.

“I’m looking forward to being a part of the AAHMS and playing a role in the mentorship of young women,” she said.

Professor Bertram is recognised globally for his many new insights into kidney developmental biology, developmental origins of kidney and cardiovascular health and disease, stereology and imaging. He has been invited to speak at more than 50 international and national conferences, has more than 280 publications to date and receives frequent invitations to contribute review articles and book chapters on kidney development and disease. His research findings have contributed significantly to recent international efforts to optimise maternal nutrition and health during pregnancy.

Professor Bertram said his team’s human population studies into kidney development and disease in particular helped make him a leader in this field.

“I’m delighted,” he said of his AAHMS appointment. “It’s nice to get recognition for the work you’ve done from your peers. Research though is a team effort – I’ve worked with hundreds of people around the world.”

40 new Fellows were announced at the Annual General and Scientific Meeting of the Academy in Perth on 10 October.

The Australian Academy of Health and Medical Sciences, formed five years ago, is an interdisciplinary body of scientists and innovators. Its Fellows are drawn from universities, medical research institutes, health services, industry, charities and the public service. It prides itself on having a representative and independent voice, through which it engages with the community, industry and governments.