Passion for spreading the word on organoid research leads to award 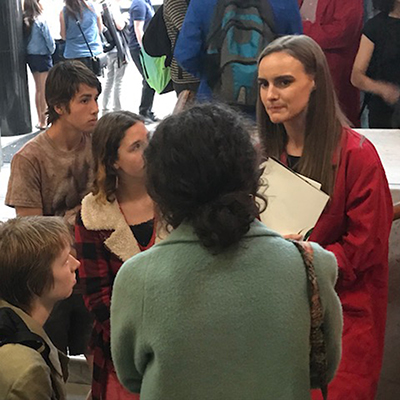 Dr Genevieve Kerr, manager of the Monash Biomedicine Discovery Institute (BDI) Organoid Program and an enthusiastic advocate for its research outside the university, has won an award for a talk she delivered recently about the program’s work.

Dr Kerr took part in the Stem Cells Australia retreat held over three days last month in Melbourne, during which she gave a pitch about her research specialising in organoid technology and 3D culture techniques.

Organoids can be mini versions of a patient’s tumour in the laboratory and may be used to personalise cancer treatments for patients.

Dr Kerr’s well-received one-minute pitch earned her a prize at the event and the chance to undertake some media training. Two other scientists also won the prize.

She was also a stem cell ambassador at the State Library at a recent public forum, ’At the frontier of tomorrow's medicine’, held by Stem Cells Australia. Dr Kerr interacted with a crowd of about 200 people, including many secondary students, explaining what organoids are and how they can be used.

“The event is a way to raise awareness about stem cell research and to help inform the general public,” she said.

“Everyone seemed to be really interested in the research being done by the Australian stem cell community. It was a really nice opportunity to share our organoid research with others and get their feedback and thoughts about what we are doing,” she said.

“Many people that didn’t know the details about current scientific research well were really enlightened about the state of affairs of stem cell research in Australia and world-wide.”

“The general message that Stem Cells Australia communicated on the night is that stem cell research is very promising, but more work needs to be done to ensure that the technology is safe before it is used to treat patients.”

Some of the students quizzed Dr Kerr about the role of women in science, what she thought of this and what it was like to be a female scientific researcher.

The two events were just part of Dr Kerr’s involvement in spreading the word about the Monash BDI Organoid Program. She was an ambassador at a Stem Cells Australia public forum last year and has participated in a number of Monash BDI open lab tours as well as a Convergent Science Network ‘Open the Vault’ event when the public was invited to tour the laboratory in which she works, run by Associate Professor Helen Abud.

“I enjoy being able to share our research with the broader public,” Dr Kerr said.

“As a scientist I think it’s our responsibility to communicate our work with others. There are so many exciting scientific advances happening in laboratories across Australia.”