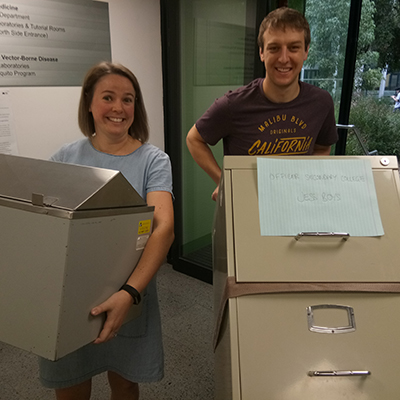 Every year around Victoria, tonnes of laboratory equipment is dumped in landfill after being outmoded by new technology, outliving its usefulness or because it is just tired. Yet to disadvantaged secondary schools, this equipment is gold.

A Monash Biomedicine Discovery Institute (BDI) alumni is connecting institutions that have items they no longer want with schools that struggle to afford to buy new equipment for their classrooms. Andrew Gray runs the Phoenix School Program, which invites disadvantaged schools to select and pick up for free equipment from either the program’s headquarters – a storage shed in Brunswick – or the institutions themselves.

Recently, Mr Gray returned to his alma mater to watch as the old microbiology building threw its doors open to around 50 secondary school teachers, some pushing trolleys, and all eager to stock their classrooms.

The 40-year-old teaching laboratories were being dismantled to make way for the new Biomedical Learning and Teaching Building; the timing was perfect. Microscopes that were surplus to need went. Laboratory dishwashers, centrifuges, pipettes, glassware, plastic containers, hot water baths, lab coats, incubators, white boards. A public announcement system from off the wall. “We had one school that pretty much built their lab from scratch,” Mr Gray said.

“I was really excited because this was a huge donation, a huge amount of equipment,” he said.

“There was stuff I’d studied with, which was pretty fun!”

Mr Gray said the estimated market value of the equipment was more than $96,000, and represented much more in savings to teachers. He said the Monash University donation was made possible by his former colleague at Monash, Dr Kylie Wilson, who suggested it, and by   Infrastructure Manager Cheryl Roberts who organised the event, and by Monash itself.

“The teachers were so overwhelmed by what we had, it was fantastic,” Ms Roberts said.

“One chap asked if he could take the hard discs from old computers – he wanted to extract the magnets in them to give to the kids to play with,” she said.

“Andrew’s done a fantastic job outside in promoting science and biomedical science, too, particularly with these schools.”

The 21 schools seeking equipment, including regional schools, were ranked according to a socioeconomic metric with the more disadvantaged schools allowed a head-start on choosing equipment. A limit was set so that the equipment was shared around, a maximum of five microscopes per school, for example. The teachers were very organised. They weren’t pushing each other around but were helping each other – it was a good atmosphere,” Mr Gray said.

The Phoenix School Program started after Mr Gray began approaching schools and universities to find equipment to stock his community science laboratory BioQuisitive. BioQuisitive, a volunteer-run service set up by him and others in 2015 offers people from all walks of life the opportunity to learn about biology and life sciences and become involved in workshops, classes and projects.

“Asking for equipment was a scary challenge because none of us had done it before,” he recalled.

The volunteers were soon swamped with scientific equipment. “When we started reaching out to people we were blown away by how much equipment was being made redundant. We asked one institution if they had a couple of microscopes and they said, ‘do you want 180?’”

So far, seven institutions, including a local council, are taking part. “I hope to have a warehouse one day, a whole Costco of scientific equipment that people can come and pick up.” Mr Gray is passionate about his voluntary work with the Phoenix program and BioQuisitive, which he juggles with part-time paid work. He has sold barbecued sausages to help fund the causes. He said he developed a keen interest in start-ups studying the Bachelor of Science Advanced – Global Challenges.

Whilst time-consuming, the projects are deeply rewarding. “We get a huge amount of satisfaction giving someone something and watching the thankfulness on their face. They’re just blown away. Sometimes they send us cards or photos of the students using equipment.”

And, of course, this recycling of items that would otherwise have ended up in landfill benefits the environment, too.

Andrew Gray is keen to hear from anyone who would like to support the Phoenix Schools Program. Contact him via email at team@phoenixschoolprogram.com