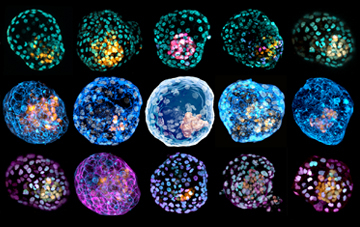 In my long career in science I remain in awe and amazed at the ability of a single cell, the egg, to develop into an embryo that can then form all the complex cells, tissues and organs that make up a baby.  How one cell can achieve all this remains  one of the greatest mysteries about what it means to be human, or any other organism for that matter.

In a major breakthrough announced today, a new innovation provides a safe, ethical and accurate system for exploring this question.  Monash scientist, Professor Jose Polo and his team have developed a cellular model called an iBlastoid which allows for research to be performed at a period of human development that has previously been nigh on impossible to investigate. Because iBlastoids model the way early embryos develop, they can be used for effective, safe and ethical research into this critical window of human development.

Use of iBlastoids to research how early embryos develop and implant in the uterus will advance our understanding and provide new therapeutic insights for a wide range of critical health issues, ranging from infertility and miscarriage, to developmental abnormalities and genetic disease.

Normally, embryo development starts with an egg undergoing fertilisation by the sperm. This triggers a series of cell divisions that results, after 5 - 6 days,  in a tiny ball of 32 - 128 cells. This structure, known as the blastocyst, is made up of an outer layer of cells (the future placenta) surrounding an inner cell cluster which goes on to become the future embryo (see Figure).

iBlastoids are generated by a completely different route that does not  involve an egg or a sperm. Instead, cells from other parts of the body such as skin cells are converted back to a precursor-like cell, a ground-breaking technology for which Shinya Yamanaka won the Nobel Prize in 2012.  These precursor-like cells (known as induced pluripotent stem cells) can be directed to develop into multiple different cell types. Professor Polo and his team grew these cells under specific laboratory conditions for 21 days and then, for a further 6 days, allowed them to aggregate together in a specialised chamber resembling a tiny inverted pyramid. Remarkably, the cells ‘self-organise’ into a structure that resembles a blastocyst. Given its origin from induced pluripotent stem cells and its blastocyst-like organisation, this structure has been called an iBlastoid.

Because human blastocysts are, quite rightly, rarely available for research and have such small numbers of cells (less than 100), research on this early window of human development is nearly impossible. The advantage of iBlastoids, as opposed to human blastocysts resulting from egg-sperm fertilisation, is that a large number of genetically similar structures can be generated for the study of early human development.

A step forward on the scale of the iBlastoid announcement will also naturally lead to a number of questions.  This is also because the breakthrough is in the field of human development, leading people to wonder: how far they can develop, how similar are they to real embryos, and ultimately, can they ever be used to create babies?  The short answer is no. There is no evidence that iBlastoids could develop into a more mature human embryo.  And it is not cloning; that is a very different process that begins with a fertilised egg or one-cell embryo.

iBlastoids are not human embryos, rather they are laboratory-derived, unfertilised cellular models of very early stage human embryos. We know from Professor Polo’s work that iBlastoids have a number of similarities, but they also have many differences when compared to human blastocysts. Because of strict current international guidelines and legislation pertaining to embryo and stem cell research, it is not permitted to determine whether iBlastoids can progress beyond the developmental stage when the primitive streak forms (about 8 days after a blastocyst first forms) or, importantly, if they can implant in the wall of the uterus. Certainly, the evidence from mouse Blastoids, which were first generated in 2017, is that they cannot properly implant into the uterine wall and cannot progress normally beyond the blastocyst stage.

As a result of this earlier mouse work and the inevitable application of these technologies to human cells, the International Society for Stem Cell Research (ISSCR) initiated work to develop new guidelines and these are due for release this year. Although it is not yet known whether iBlastoids were to be covered by these guidelines, there is now an urgent need to ensure they are included in all relevant policy discussions.

For those many women and their partners and families who struggle to get pregnant, or who have suffered the tragedy of a miscarriage, and for those who fear their baby may be born with a developmental or genetic defect, this remarkable advance will finally start to give us some answers about what happens in this brief but critical window of human development.