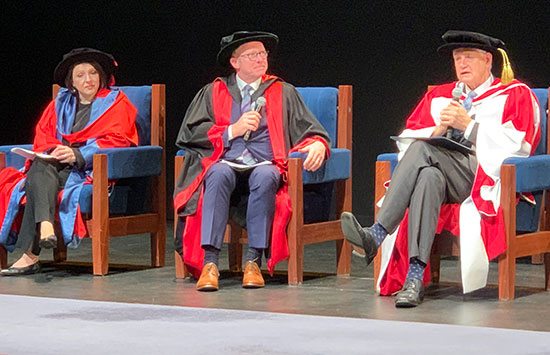 An engaged audience at Monash University heard CEO and President of Cold Spring Harbor Laboratory in the US, Professor Bruce Stillman, AO, speak of the wide-ranging impacts of investing in fundamental discovery research, give insights into career success and predict some exciting directions of biomedical science in the future.

Professor Stillman, who sits on Monash BDI’s International Scientific Advisory Board and chaired it in 2019, was speaking at an awards ceremony for Honorary Doctorates conferred by Monash University at the Alexander Theatre on 16 March.

Cold Spring Harbor Laboratory (CSHL), a private, non-profit institution renowned for its high-impact discovery science, has been home to eight scientists awarded the Nobel Prize in Physiology or Medicine and has been ranked among the leading basic research institutions in molecular biology.

Professor Stillman, a biochemist and cancer researcher, shared his views on a range of issues pertinent to fundamental scientists today and addressed questions from the audience.

Discovery research was critical for medical advances and progress in health, he said. Without it there would be no mRNA vaccine, for example. He spoke of how US government investment in fundamental research has had a major economic impact.

Pointing out the success of long-term investments in fundamental science was the best way of convincing decision-makers to fund it, he said. The publicly funded human genome study for example, cost $3 billion over 10 years but in the 20 years since, the economic advantage was more than a trillion dollars just in genetics and genomics in companies in the US, he said. “That return is better than any stock market return.”

Fifty per cent of the research at CSHL is funded by philanthropic funds. “Philanthropy has really been the driver of discovery in science. And that is something that is emerging in Australia.”

Professor Stillman gave a few pointers on building a career in science.

“The opportunity now in science is absolutely enormous because of the technology development over the last 20 or 30 years,” he said. “There’s going to be more opportunities for integration between the fields of science.”

Always work on something fundamental in science that will impact many areas of biology and biomedicine rather than something niche, he suggested.

“It’s always been a tough life as a scientist but very rewarding if you stick with it.”

Professor Stillman has been director or president of the ‘Laboratory’ – one of the world's leading biomedical research institutions – since 1994 but hails from Australia. He started his secondary studies at Glen Waverley High School, did his undergraduate studies at Sydney University, and then gained a PhD at ANU before moving to the US. ANU was the only lab in Australia then studying cancer-causing viruses, in which he was interested. At ANU he purified and distributed some of the first restriction enzymes in Australia when recombinant DNA was in its infancy.

Professor Stillman predicted that neuroscience would be “the science of the 21st Century” and would have an impact on computer science, data acquisition, storage and memory and “all kinds of things that have nothing to do with medicine”.

He envisaged that quantum computing, new AI and understanding how the brain computes in circuits could be a promising combination of fields.