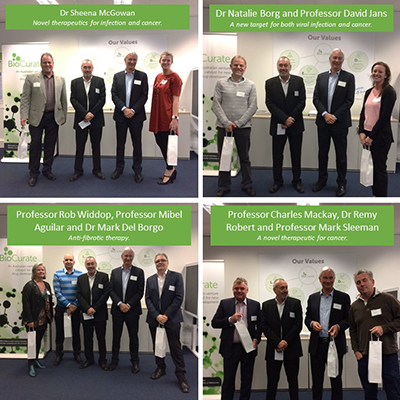 Researchers from the Monash Biomedicine Discovery Institute (BDI) are involved in four of six successful projects announced by BioCurate last week. These projects represent the first round of investments for BioCurate, a joint venture of Monash University and the University of Melbourne, supported by the Victorian State Government.

BioCurate aims to be a recognised global leader in the translation of basic medical research into human therapeutics. With the announcement of these six drug discovery projects, BioCurate has formally commenced its core business of targeting the critical early phases of drug development.

All of the projects have compelling clinical and commercial reasons to support their early investment and development. Each addresses an important unmet clinical need, adopts a novel approach and targets potential global markets.

The four successful projects Monash BDI researchers are involved in are:

The development plan for each project identifies key ‘Go/No-Go’ gates with an early and consistent focus on ensuring the essential commercial imperatives of reproducible data and a clear intellectual property position.

Working closely and collaboratively with each of the project’s investigators and university colleagues, BioCurate is providing ‘on the ground’ expertise and mentoring in drug development and commercialisation, funding and project management. This, coupled with BioCurate’s extensive international industry experience in drug development and biopharmaceutical and investment networks, will boost the opportunity for these, and future, projects to undergo successful translation.

Monash BDI Director, Professor John Carroll, emphasised the impact this funding will have on the research output of the institute’s researchers.

“This investment from BioCurate will accelerate the translation of our discovery research into the next generation of therapeutics,” Professor Carroll said.

“BioCurate’s critical role as a catalyst across universities, government and industry helps to accelerate improvements to the health of the community,” Mr Sloan said.

“We are delighted therefore to see the first cohort of research projects enter BioCurate’s pipeline for investment and development,” he said.

“I am delighted that BioCurate has taken this important next step. We are building on the combined research strength of these two outstanding Australian universities, accelerating and strategically guiding these high value projects to give them the best possible chance of commercial and clinical success,” Dr Begley said.

Minster for Innovation and the Digital Economy Philip Dalidakis also congratulated BioCurate on this milestone, and the researchers involved.

“The Victorian Government is proud to support the early-stage drug development research lead by Melbourne and Monash Universities, whose combined expertise in the areas of pharmacology, immunology, neurosciences, and cardiology see them ranked among the world’s best,” Minister Dalidakis said.

“Congratulations to the successful researchers, whose projects have the potential to cure terrible diseases and improve patient care both across Victoria and around the world,” he said.

This article is based on a media release originally published by BioCurate. Read the full release here. 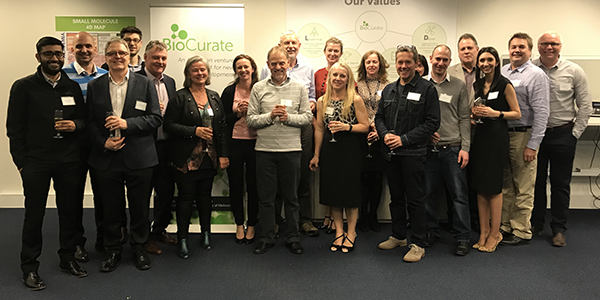