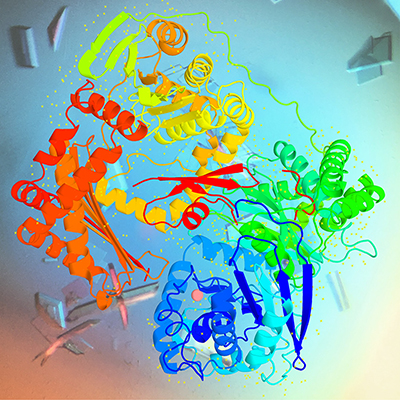 Monash University’s Biomedicine Discovery Institute (BDI) researchers have made important – and fascinating – insights into a survival mechanism in a bacterium that causes rotting in certain plants, among them a highly invasive weed that has been declared noxious in some Australian states.

The researchers’ study, published today in PLOS Biology, has demonstrated for the first time exactly how the bacterium Pectobacterium obtains the iron vital to its survival and replication, by pirating it from iron-bearing proteins in certain plants.

The molecular mechanism by which these iron-bearing proteins can be imported by the bacterium was previously unknown, as was the evolutionary process that could have led to it.

Lead author Dr Rhys Grinter, a Sir Henry Wellcome Fellow at the Monash BDI, said the team used comparative genomics to forensically track the origins of an enzyme, called FusC, that turned out to be the key factor for the import and acquisition of iron. Without acquiring iron, the bacterium would die.

In work done at the Australian Synchrotron, the researchers used X-ray crystallography to see the atomic structure of purified FusC and the iron-containing protein from the plant.

“I produced and purified the two proteins then mixed them together,” Dr Grinter said.

“Then I worked to discover conditions in which crystals of the two proteins formed, so we could see how the processing of the iron-containing protein by FusC was occurring,” he said.

“At a molecular level FusC looks like a clamshell, a clamshell that engulfs the plant’s iron-bearing protein. Once inside, the FusC chops up the ferredoxin to release the iron into the bacterium, keeping it alive.”

“The co-crystal structure lets you see exactly what goes on – you can make a lot of conclusions and a really clear model of how the system functions.”

Dr Grinter said this was the first characterisation of the function of FusC at an atomic level and that FusC represents an entirely new class of protein.

The up-close observations were surprising.

“This is the first example of bacterium taking a protein from its host, importing it into the bacterial cell then processing it inside the cell,” Dr Grinter said.

“As far as I’m aware there have been no reports of a bacterium intentionally importing a protein in its native state into the cell,” he said.

“Something broadly equivalent has been reported for some pathogens targeting human iron-bearing proteins, but that processing always happens outside the bacterium.”

Pectobacterium is of increasing scientific interest forits potential as a biological control agent against weeds such as Allium triquetrum (angled onion), which can  grow to smother native ground flora such as orchids, lilies and grasses, leaving large infested areas bare of natural vegetation.

“Knowing exactly how the bacterium obtains iron adds to the knowledge needed to maximise the potential of Pectobacterium as a biocontrol agent,” Dr Grinter said.

Dr Grinter said they showed the bacterium had ‘re-evolved’ the iron-importing mechanism in a way that paralleled the protein import pathways evolved in mitochondria and chloroplasts, the energy centres of plant cells.

“The study not only elucidates the mechanism of how this bacterium imports iron-loaded proteins, with its obvious practical applications, but also reveals a new paradigm for how bacteria evolve protein transport pathways in general. This will include the bacteria that infect humans and animals, not just plants,” he said.

Dr Grinter will present some of the findings at to the British Society of Biophysics at a conference in the United Kingdom in August.

Read the full paper in PLOS Biology titled FusC, a member of the M16 protease family acquired by bacteria for protein import across the outer membrane.