Obesity on the agenda: five events in five weeks 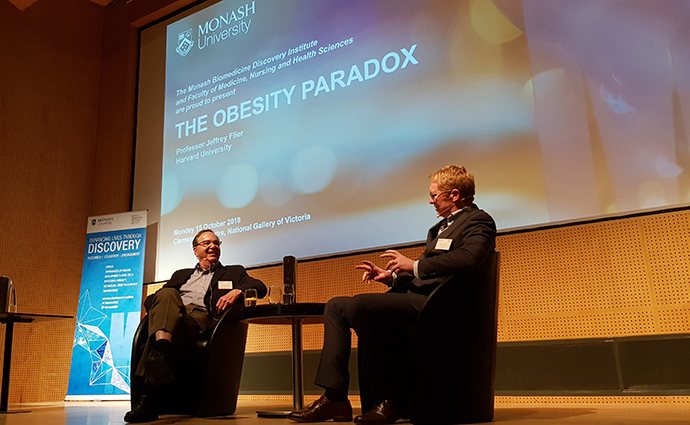 It’s been a busy month for the Monash Biomedicine Discovery Institute’s (BDI) Metabolism, Diabetes and Obesity Program, with five major events held between 15 September and 18 October.

The month of obesity-themed activities began with a strategy day for obesity and diabetes research at Monash on Saturday 15 September. This strategy day, held at Monash’s Caulfield campus, brought together more than 40 researchers (including discovery scientists, translational researchers, clinicians and surgeons) from three Faculty of Medicine, Nursing and Health Sciences (MNHS) schools and their affiliated institutes.

This strategy day aimed to foster collaboration across basic and clinical research, focusing on developing a cross-cutting program for combating obesity and Type 2 diabetes. During the day, researchers explored how the different areas can interact more effectively to rise to this challenge.

The program included presentations showcasing the research strengths and priorities across the Faculty, poster presentations from ECRs and an interactive session facilitated by Professor John Carroll, Director of the Monash BDI.

Following on from the strategy day, the Monash BDI had the honour of hosting a contingent of international leaders in obesity and diabetes research.

Professor Tamas Horvath delivered the inaugural Monash BDI–Yale Alliance lecture on Thursday 11 October. This lecture marked the two year anniversary of the establishment of this alliance.

In his lecture, Professor Horvath covered the basics of appetite control in a variety of neural functions (such as mood, appetite and sleep) and how these functions need to be considered in the development of therapeutic approaches to treat obesity and diabetes.

On Monday 15 October, the Monash Metabolism Mini-Symposium was held. With the Monash BDI hosting a contingent of internationally renowned scientists, this was a not-to-be-missed opportunity to showcase the latest and greatest discoveries from this select group of prominent scientists.

Later that evening, the Monash BDI and MNHS hosted a distinguished public lecture titled ‘The Obesity Paradox’. Professor Jeffrey Flier, former Dean of Medicine at Harvard University, took the audience through the journey of obesity research in the last 50 years, and explained how our understanding of the intricacies of energy balance and the hormones involved in regulation has improved over the years.

Professor Flier, who himself has been instrumental in advancing our knowledge of obesity and diabetes, explained the obesity paradox: despite the new knowledge we have gained, the prevalence of obesity continues to increase worldwide. Many questions remained unsolved.

Concluding his talk, Professor Flier stated that the physiology of energy balance is highly complicated and that evolution is working against us. Finishing on a positive note, Professor Flier comforted the audience by explaining that breakthroughs of as yet undiscovered factors may lead to better treatment approaches in the future.

The public lecture was attended by more than 200 people, and included a thought-provoking Q&A session, moderated by Professor Carroll. Questions ranged from the role of the microbiome in keeping a healthy metabolism to links between obesity and mental health.

Closing the month-long obesity activities was the Breakthrough Discoveries in Metabolism, Diabetes and Obesity Meeting, held in conjunction with the Australian and New Zealand Obesity Society Annual Scientific Meeting, held from Tuesday 16 to Thursday 18 October.

During the conference, Dr Garron Dodd received the 2018 ANZOS Young Investigator Award for his presentation, titled ‘Can our brain instruct our body to burn more fat?’ Congratulations Dr Dodd!

Professor Tony Tiganis, Head of the Monash BDI’s Metabolism, Diabetes and Obesity Program, was instrumental in organising this array of obesity events.

"This round of events has been important in showcasing the latest research of our world-leading Monash BDI obesity experts. We have worked to inform the public of the impact of obesity–with Professor Flier's public lecture–and foster connections across the globe with international researchers,” Professor Tiganis said.

“These events have been highly successful in their various goals and I look forward to seeing what collaborations and new discoveries they may have brought about," he said.

If you were not able to attend the public lecture but would like to hear from Professor Flier, you can listen to the audio of his talk here.