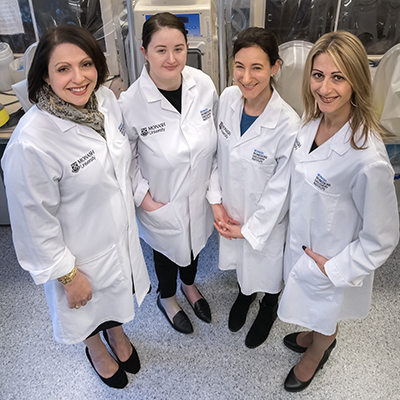 Bacterial spores are a dormant, resistant cell type that cause disease in hospitals, are problematic in the food industry and agriculture, and which can be used in bioterrorism.

In a paper published recently in PLOS Pathogens, conducted entirely by researchers from Monash University’s Biomedicine Discovery Institute (BDI), led by Professor Dena Lyras, provide new insights into how these highly infectious cell types colonise their host and cause disease, and precisely which proteins help them do it.

The paper looks at the lethal Clostridium sordellii, a spore-forming bacterium responsible for severe human and animal diseases, including enteritis (inflammation of the intestine) and toxic-shock in women who have just given birth or undergone an abortion.

Despite the importance of C. sordellii spores in disease, the spore form of the bacteria has not been well defined or well researched in the past, Professor Lyras said.

Spores are a stealthier form of the bacteria which, like seeds from plants, lie waiting in environments in which the bacteria would otherwise die for the right conditions for survival to occur.

Spore particles sit dormant in hospitals, for example, until they come into contact with the host’s surface, where they germinate to form the cells that go on to produce toxins and cause disease. Often this occurs in the gastrointestinal tract (gut).

Using a mouse model of gut disease, researchers from the Monash BDI’s Infection and Immunity Program defined the proteins that make up the outermost layer of the spore, which interact with the mucous membrane lining the host’s gut. They then identified the proteins that were important to correct spore structure and fitness.

“We identified unique proteins called CsA and CsB that had not been identified before,” Professor Lyras said.

“These are really important for the structure of spores and the properties that make them tough and resistant to the environment. One of them in particular – CsB – was really important in interacting with the host and subsequently the disease that was caused,” she said.

“If you could understand these interactions and prevent them from happening you could stop infection from occurring and prevent disease.”

“From a more translational perspective, we’ve actually identified proteins that could be targeted in a vaccine strategy or blocking strategy to prevent interaction of these cell types with the host in the hope that we can reduce infection rates,” Professor Lyras said.

“This is the first time that a study like this has been performed on this devastating pathogen; the results we obtained were not anticipated but they are very exciting,” first author Dr Rebecca Rabi said.

The findings may apply to diseases other than gut disease, including post-abortive clostridial toxic-shock.

“In women with medically induced abortions, while the disease is rare, it is devastating – the mortality rate is almost 100 per cent,” co-senior author, Dr Milena Awad said.

They may have relevance to the veterinary industry and could apply to other species of bacteria, a broad field.

Professor Lyras said bacteria spores had been hard to study in the past but that mass DNA sequencing and a mouse model of gut disease developed by one of the paper’s authors, Dr Sarah Larcombe, enabled this research to occur.