The flu vaccine largely doesn’t work. A Cochrane study published last year found that out of every 100 healthy adults vaccinated, 99 get no benefit against laboratory confirmed influenza.*

The lack of efficacy of the current influenza vaccines are due to a combination of relying on stimulating the development of antibodies and the ability of the flu virus to mutate every season, making the previous year’s vaccine less effective.

One of the Holy Grails for flu researchers has been to create a vaccine that stimulates T cells – cells in the immune system that can trigger long lasting immunity. But the tricky part has been working out just how to make this happen effectively.

Now, in a paper published in Nature Communications, Professors Nicole La Gruta and Tony Purcell, and Dr Nathan Croft and their teams from the Monash Biomedicine Discovery Institute, have revealed, using a mouse model of flu infection, how the immune system ‘presents’ – via two main pathways – small bits of the flu virus (peptides) to T cells to stimulate the development of T cell immunity against the disease.

According to Professor La Gruta, the level of the immune response, and the protection each person gets against flu infection, is “driven in large part by which viral peptides are 'presented' to the immune system, and how abundantly they are presented,” she said. This is because these viral peptides are specifically recognised by T cells, which drives their activation and their ability to go on to attack and kill virally infected cells.

How particles of a virus are presented by the immune system, which is at the heart of how a patient develops immunity, has been a “bit of a black box” according to Professor La Gruta. This has been further complicated by the fact that there are two major pathways by which viral peptides can be presented to the immune system to cause cellular activation.

Using a specialised mass spectrometry approach, the researchers were able to study the way that the immune system presented peptides derived from flu viral particles in the two main presentation pathways leading to immunity.

Professor Purcell noted that “Mass spectrometry is the ideal tool to gain a holistic view of the viral peptides that are presented by the two main presentation pathways and generate key quantitative insights into their source, abundance and kinetics of presentation – all of which may be key factors in generating T cell mediated anti-viral immunity” 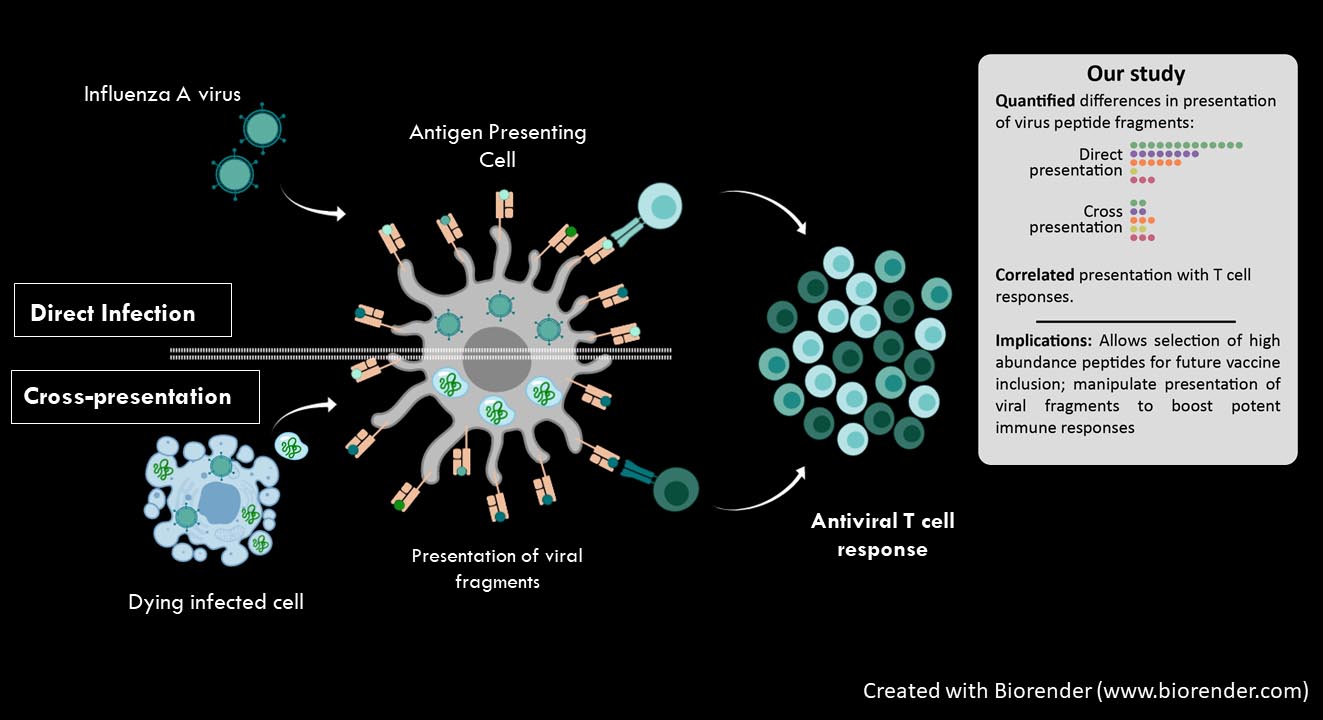 Importantly, the researchers found that both pathways are important in the development of immunity, “even though the two pathways work very differently”.

“This is the first time this has been shown at this level,” notes Dr Croft, adding that “viruses offer us a wonderful opportunity to gain insight into the intricacies of the immune system.”

What does this mean for the development of a newer and better influenza vaccine? Vaccines based on generating T cell responses are less prone to failing because the capacity of the flu virus to mutate functionally conserved regions of the virus that are targeted by T cells is diminished compared to the more variable surface proteins that are targeted by antibodies – which is why a T cell vaccine is the Holy Grail of vaccine researchers.

According to Professor La Gruta, “knowing which viral peptides are being presented to the immune system, how well they are presented, and by which pathway, is essential for the informed development of vaccines (e.g. peptide selection) and immunotherapies designed to augment T cell responses.”

* The Conversation, The flu vaccine is being oversold – it’s not that effective, 5 June 2019

Read the full paper in Nature Communications titled Quantification of epitope abundance reveals the effect of direct and cross-presentation on influenza CTL responses.