The study, published today, set out to investigate how a family of proteins called Atg4s was involved in the clearance of damaged mitochondria. Mitochondria – tiny structures in our cells that play vital roles in providing us with the energy we need to live – are toxic to cell health when damaged. The cell death or inflammation that results are linked to neurodegeneration in Parkinson’s disease, a focus of the Lazarou lab.

The study was probing mitophagy, specialised ‘garbage disposal’ that captures and degrades damaged mitochondria. Mitophagy can be activated by PINK1 and Parkin, two proteins mutated in inherited forms of Parkinson’s disease. These proteins govern the formation of a specialised membrane vesicle (sac) called an autophagosome, which encapsulates damaged mitochondria. “What we’re thinking is that if you can form the garbage bag more rapidly you can better protect cells from mitochondrial damage,” Dr Lazarou said.

But the project took on a completely different path, he said.

In seeking to image the autophagosome membrane, the researchers developed an artificial intelligence framework to reconstruct 3D electron microscopy data. “This new imaging approach allowed us to see damaged mitochondria being captured by autophagosomes in unprecedented detail,” Dr Lazarou said.

“The big challenge is that electron microscopes can generate hundreds of slices of data and to get a 3D image you have to reconstruct all those slices of data and put them all back together,” he said. “Typically you identify your structures of interest and draw around them by hand – a process that takes months and is prone to human inaccuracy.”

Co-first author Dr Benjamin Padman used pre-existing algorithms and trained them to be able to ‘see’ the membranes within the electron microscopy images.

“One of our big selling points is that no one has really thought to combine AI surface detection with pulling out the raw data. As far as I know, as applied to cell biology applied in this context it’s the first time,” Dr Lazarou said.

The researchers have called the 3D EM approach AIVE (ay-vee) for for Artificial Intelligence-directed Voxel Extraction. The approach greatly increased the workflow, is accurate and could be used in any field, Dr Lazarou said. “We’ve optimised it for cells grown in culture but we think it can be trained to image all sorts of samples. We could image viruses or bacteria invading cells in 3D.”

The researchers now want to apply AIVE to neurons.

And as for the original aim of the study?

“We revealed that the Atg4s can actually perform other functions,” Dr Lazarou said. “These include a role for Atg4s in Atg9A vesicle trafficking to mitochondria.”

Atg9A vesicles play an important part in growing autophagosome membranes. The researchers also found that Atg4s are assisted in their quest to grow autophagosomes by other proteins including LRBA, which has been previously linked to immune disease.

“LRBA is a friend of the Atg4s and is in the same region as them, and that means they’re likely to function together to regulate Atg9A vesicle trafficking.”

First authors on the paper were Dr Nguyen and Dr Padman. 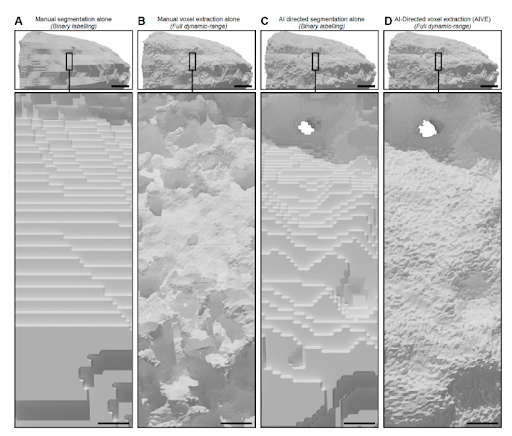