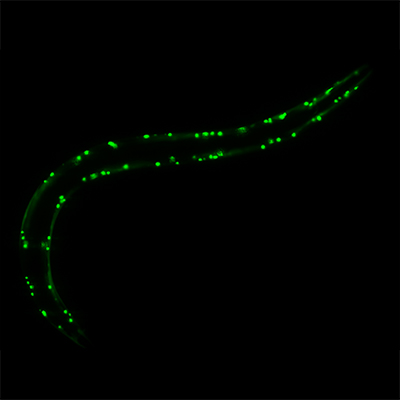 Research led by a Monash University scientist has identified a highly conserved mechanism in worms and humans that controls the removal of toxic protein aggregates – hallmarks of neurodegenerative diseases. Insights from their study may provide a novel therapeutic approach for diseases such as Huntington's and Parkinson's.

Associate Professor Roger Pocock, from the Monash Biomedicine Discovery Institute (BDI), and colleagues from the University of Cambridge led by Professor David Rubinsztein, found that microRNAs are important in controlling protein aggregates, proteins that have amassed due to a malfunction in the process of ‘folding’ that determines their shape.

Their findings were published in eLIFE today.

MicroRNAs, short strands of genetic material, are tiny but powerful molecules that regulate many different genes simultaneously. The scientists sought to identify particular microRNAs that are important for regulating protein aggregates and homed in on miR-1, which is found in low levels in patients with neurodegenerative diseases such as Parkinson’s disease.

“The sequence of miR-1 is 100 per cent conserved; it’s the same sequence in the Caenorhabditis elegans worm as in humans even though they are separated by 600 million years of evolution,” Associate Professor Pocock said.

“We deleted miR-1 in the worm and looked at the effect in a preclinical model of Huntington’s and found that when you don’t have this microRNA there’s more aggregation,” he said. “This suggested miR-1 was important to remove Huntington’s aggregates.”

The researchers then showed that miR-1 helped protect against toxic protein aggregates by controlling the expression of the TBC-7 protein in worms. This protein regulates the process of autophagy, the body's way of removing and recycling damaged cells and is crucial for clearing toxic proteins from cells.

“When you don’t have miR-1, autophagy doesn’t work correctly and you have aggregation of these Huntington’s proteins in worms,” Associate Professor Pocock said.

Professor Rubinsztein then conducted research which showed that the same microRNA regulates a related pathway to control autophagy in human cells.

“It’s a novel pathway that can control these aggregation-prone proteins. As a potential means of alleviating neurodegenerative disease, it’s up there,” he said.

Additional work by Associate Professor Pocock’s colleagues showed that when human cells are supplied with a molecule called interferon-b the miR-1 pathway is upregulated, revealing a way of manipulating it.

He said the studies demonstrated the fundamental importance of discovery research. “We asked a fundamental biological question to dissect a molecular mechanism that now is shown to be really important for potential therapies.”

The researchers have provisionally patented their findings and are in discussions with pharmaceutical companies about translating the research. They will further test it in preclinical models for Huntington’s and Parkinson’s disease.

This research was supported by the Australian NHMRC.