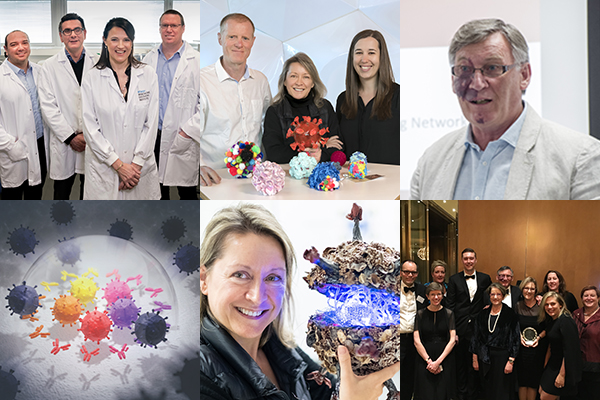 Bone marrow and organ transplant recipients have highly compromised immune systems and are at high risk of developing life-threatening infections following transplantation. The team found a way to manage one of the most common viral infections caused by cytomegalovirus (CMV). Using antibodies, they were able to prevent the virus from coming back (reactivating) and causing disease.

Led by Professor Degli-Esposti and Professor Hill, the team created a world-first pre-clinical model to examine the reactivation of CMV following bone marrow transplantation. They discovered that antibodies are key to limiting reactivation, and injecting mice after transplantation with antibodies matched to the infecting strain of CMV (CMV strain-specific antibodies) protected them from CMV reactivation. They believe the results pave the way for future clinical trials to test this approach as a novel therapy.

“I’m thrilled that our team has been selected as a finalist for this illustrious scientific award. This discovery is the result of a terrific collaboration between viral and transplant immunologists who want to see patients protected from the life-threatening impact of CMV,” Professor Degli-Esposti said.

ARC Laureate Fellow, Professor Jamie Rossjohn, and his team are finalists for the Department of Industry, Innovation and Science Eureka Prize for STEM Inclusion. The team, including Dr Gabby Watson and Dr Erica Tandori from the Monash BDI and Dr David Jacques from the University of New South Wales (UNSW), developed an innovative program that aims to engage members of the blind and low vision community with science.

Often when science is conveyed to the public, the audience is assumed to be able-bodied. Members of the community with disabilities are frequently overlooked when the method to communicate the scientific discovery is not specifically tailored to their needs. A prime example is the blind and low vision community of more than half a million Australians.

Watson, and legally-blind artist-in-residence Dr Tandori, who transformed scientific concepts into tactile models and artistic displays that were specifically tailored to this community.

“As the artist working with this amazing team, I can open up a world of scientific discovery to the low vision and blind communities – finally, we can all be part of the wonder of science, and share  this  in a way that is accessible to everybody,” Dr Tandori said.

Following the overwhelmingly positive feedback from the first exhibition held at Monash in May 2018, the team engaged with Dr Jacques at UNSW, who spearheaded the second Sensory Scientific Exhibition held in Sydney in December the same year.

Professor Paul Wood AO, an Adjunct Professor in the Department of Microbiology, is a finalist for the University of Technology Sydney Eureka Prize for Outstanding Mentor of Young Researchers. Professor Wood is a highly respected mentor and the driving force behind the Industry Mentoring Network in STEM (IMNIS) program.

The idea for IMNIS was born when Professor Wood was asked to develop a training program for biomedical science PhD students at Monash. The ‘Project to Product’ module ran over six weeks, and while the interactions he had with the students were productive, this made Professor Wood realise how little understanding they has of industry. He decided that a mentoring program was the answer.

The vision for IMNIS was “what if we had 500 PhD students in STEM each year being mentored by industry professionals, and we did this for 10 years – what might the culture look like, and could we develop a new, more industry-aware PhD graduate?”

IMNIS incorporates one-on-one mentoring and networking opportunities. Professor Wood’s passion for mentoring the next generation of scientists and entrepreneurs continues to expand. His vision for being able to scale mentoring in a way that makes it easy for industry professionals to become involved has led to IMNIS now being a national program operating in five states and involving more than 320 PhD students from 17 universities.

The Project to Product module at Monash is now in its sixth year. More than 100 PhD students have completed this program so far.

The winners will be announced on Wednesday 28 August at Sydney Town Hall. For more information on the Eureka Prize, visit the Australian Museum website.

UNSW Eureka Prize for Scientific Research finalist Professor Mariapia Degli-Esposti explaining the ground-breaking discovery she and her team made into cytomegalovirus.