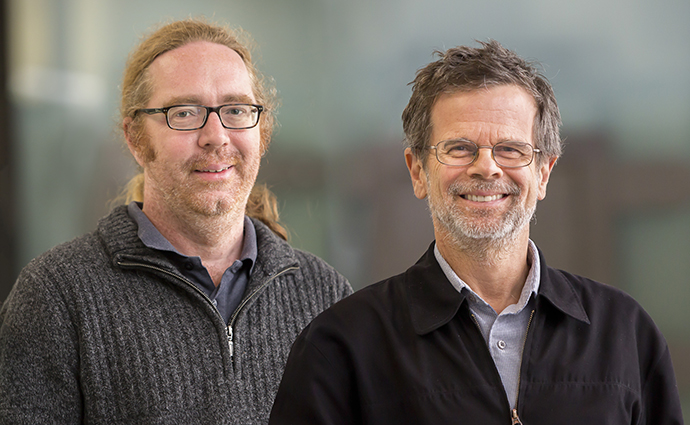 Researchers from Monash University and the University of Melbourne have found a way to stop the rabies virus shutting down the body’s immune defence against it. In doing so they have solved a key scientific puzzle and have laid the foundation for the development of new anti-rabies vaccines.

Rabies kills an estimated 60,000 people a year, most of them in developing countries, overwhelmingly through dog bites.

Dr Greg Moseley, from the Monash Biomedicine Discovery Institute (BDI), and Associate Professor Paul Gooley, from the Bio21 Institute were senior authors in the study, published today in Cell Reports.

“It’s been known for a long time that many viruses target the human protein STAT1 and related proteins to shut down the host’s immune defences, and it’s also assumed that this is very important for diseases,” Long-term rabies researcher Dr Moseley said.

However, it was not known exactly how P-protein ­– the main ‘immune antagonist’ of lyssaviruses including the rabies virus – takes hold of STAT1, due to a lack of direct structural data on STAT1 complexes with viral proteins.

“The challenge was to produce the key proteins on the viral and host sides in a test tube and keep them stable so we could interrogate the interaction directly; this hadn’t been done before, at least for the full-size human protein,” Dr Moseley said.

The researchers then brought the two proteins together and, using nuclear magnetic resonance spectroscopy, showed the precise regions where the viral protein sticks onto STAT1 and holds onto it to keep it away from locations in the cell where it needs to be to activate the immune response.

“We were able to find new regions and new sites for mutations and so could target these in a virus, completely preventing it from being able to grab hold of STAT1,” Associate Professor Gooley, an expert in nuclear magnetic resonance spectroscopy, said.

To the researchers’ knowledge, this was the first direct structural analysis of binding of full sized STAT1 to a viral protein, even though many viruses such as measles and Hendra target this protein.

Using a ‘wild’ strain of rabies virus, collaborators at the Pasteur Institute in France showed that by disabling this binding they could strongly weaken even a highly pathogenic virus.

The findings of their five-year study are the subject of a recently lodged international patent.

A global drive is underway to find better ways to counter rabies, which is caused by the rabies virus and also other lyssaviruses including an Australian bat virus. Methods such as culling dogs have not worked to control rabies and while mass vaccination is effective, catching and injecting animals is problematic, Dr Moseley said.

“The development of a new safe and highly effective rabies vaccine that can be given orally or as ‘baits’ would be a major step forward,” he said.

“I’m not a virologist but I’m excited to have been involved in a project that could lead to a safer oral vaccine for rabies to eliminate it, especially in developing countries,” Associate Professor Gooley said.

“Like Greg I’m a discovery scientist, driven by curiosity. I enjoy solving scientific problems,” he said.

“The state-of-the-art technological tools and methods used in the study could also be applied more broadly to counter other viruses that target STAT proteins.”

First author on the paper was then PhD student Dr Alamgir Hossain.

Read the full paper in Cell Reports titled Structural Elucidation of Viral Antagonism of Innate Immunity at the STAT1 Interface.

About the Bio21 Molecular Science and Biotechnology Institute

Bio21 is one of Australia’s largest molecular science and biotechnology research institutes, accommodating more than 600 University researchers across the chemical, biochemical, biomedical and bioengineering sciences. World leading research in the institute is supported by sophisticated analytical research infrastructure platforms funded from Federal/NCRIS, State and University sources. Located within the Melbourne Biomedical Precinct, Bio21 demonstrates the power of bringing together researchers, established industry and start-up companies to address global problems.