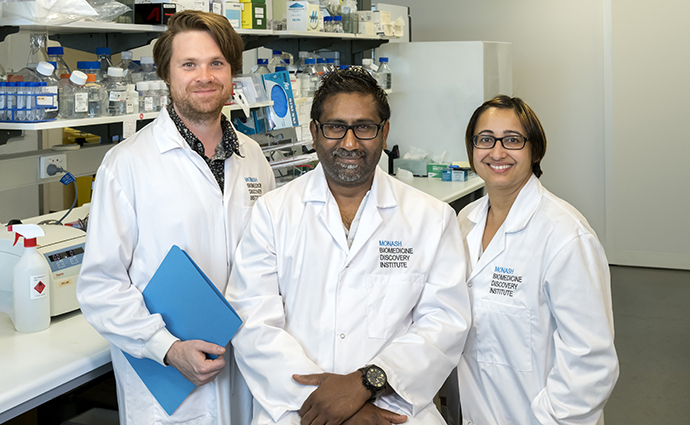 Their findings were published in Molecular Cell today.

Monash BDI’s Dr Partha Pratim Das said TAF5L and TAF6L were discovered in a CRISPR-Cas9 loss-of-function genetic screen aimed at finding epigenetic regulators from among 323 epigenetic genes and at establishing how these controlled the embryonic stem cell state.

“It has been known that these factors existed, but for the first time we showed what they do and how they control gene expression,” Dr Das said. “Their function was not known before,” he said.

“From our study we can show the exact mechanism and how these epigenetic regulators control gene expression.”

“The two main things we found were that TAF5L and TAF6L transcriptionally activate the oncogene c-Myc, and also regulate OCT4 that is the master regulator of the embryonic stem cells.”

“We found that the MYC regulatory network is predominantly controlled by them by which they maintain the self-renewal aspect of the embryonic stem cell state.”

The findings would potentially make TAF5L and TAF6L very significant not only in the regenerative biology field but also in cancer research, he said.

The scientists are further investigating whether TAF5L and TAF6L are linked to various types of cancer and whether they play an important role in neurodevelopment, testing this in mouse and human brain organoids.

This research was supported by the National Health and Medical Research Council of Australia (NHMRC).