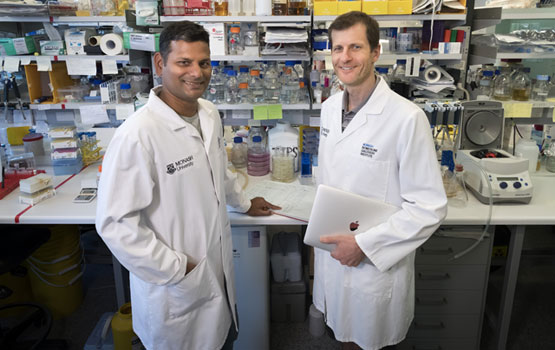 The study, published in Nature Microbiology, points to potential new ways of countering bacterial infections, which are becoming increasingly resistant to antibiotics.

The study showed that immune cells sense that their mitochondria are no longer functional during infections, which triggers apoptosis.  “Ironically, it is the activation of host cell death factors that deliver the final blow to mitochondria which induces apoptosis, not the bacterial toxins themselves,” Dr Pankaj said.

The researchers genetically targeted apoptotic factors and showed that they were able to reduce inflammation in mice, which increased health outcomes.

They used the bacterial pathogens Neisseria gonorrhoeae, uropathogenic Escherichia coli and the deadly Pseudomonas aeruginosa, prevalent in hospitals and which can be multi-drug resistant. However, the findings would apply to other species of bacteria too, Dr Deo said.

“There’s been a lot of effort trying to block endotoxins that kill immune cells but this study really shifts the focus onto different toxins that might be more important,” Dr Naderer said.

“It gives us a few good leads that we can look at as a next step,” he said.

“We’ve shown in this paper that we can accelerate the immune response,” he said. “The other side is that if that response persists and we get constant inflammation – which is usually associated with bacterial infection and which causes a lot of tissue damage – we have a new way to shut down that tissue-damaging inflammation.”

“What scientists have thought before is that when endotoxins are released by bacteria they induce an inflammatory type of programmed cell death called pyroptosis in immune cells,” Dr Deo said. Endotoxins are part of the external cell wall of essentially all Gram-negative bacteria.

“We’ve found that the pathogenic bacteria use a similar mechanism to release additional toxins,” he said. “They kill immune cells by releasing small surface structures called outer membrane vesicles – packages of toxins that target mitochondria. The mitochondria are disarmed, become dysfunctional then die according to apoptosis or cellular suicide.”

The scientists will investigate drugs that are now advancing to the clinic, and at repurposing drugs already in use, perhaps as anti-cancer treatments, to see if they can be used to clear bacterial infections.

Collaborators included Dr Kate Lawlor from the Hudson Institute of Medical Research and Dr James Vince from the Walter and Eliza Hall Institute.

About the Monash Biomedicine Discovery Institute at Monash UniversityCommitted to making the discoveries that will relieve the future burden of disease, the newly established Monash Biomedicine Discovery Institute at Monash University brings together more than 120 internationally-renowned research teams. Our researchers are supported by world-class technology and infrastructure, and partner with industry, clinicians and researchers internationally to enhance lives through discovery.