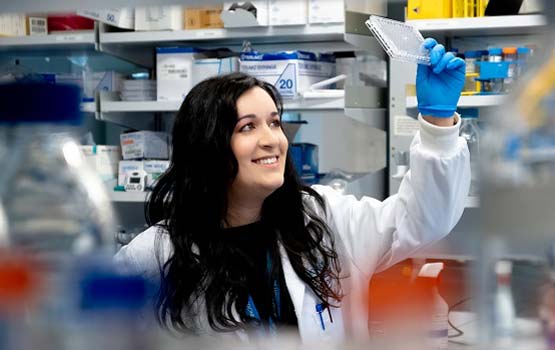 A collaboration between Monash Health, the Australian Genomics Health Alliance (AGHA) and researchers at the Monash Biomedicine Discovery Institute has led to the discovery of a rare single gene mutation in a patient that eliminates an immune cell population, namely MAIT cells.

This study's journey began with a patient of Dr Samar Ojaimi from Monash Health who presented with a mild primary immunodeficiency with no known cause. He was identified as a candidate for the Genetic Immunology Flagship of AGHA led by Professor Matthew Cook from the Centre for Personalised Immunology at the Australian National University, which focuses on identifying genetic causes for immunological diseases.

The genome sequencing by the AGHA team identified a rare mutation in the gene encoding a protein called MR1, which normally helps initiate an inflammatory response from an immune cell population called mucosal-associated invariant T (MAIT) cells.  However, upon further investigation by a research team from Monash BDI, led by Dr Lauren Howson, they uncovered there had been a complete loss of this immune cell population, while the rest of the immune system remained intact.

“We studied the patient’s MR1 protein structure and found that the mutation prevented MR1 from being able to bind the vitamin metabolite it normally presents in order to activate MAIT cells. This led us to look at the patient’s immune system to see what effect the mutation had on the MAIT cell population and we were surprised to find it completely gone,” Dr Howson said. Published in Science Immunology, the study demonstrates the power of interdisciplinary collaboration to uncover the impact of a single gene mutation and aid in diagnosis of rare immune disorders.

It not only advances the MR1 and MAIT cell biology research fields, but also demonstrates the substantial impact that discovery-based research can have when combined with clinical and genetic research, creating an avenue for advanced personalised medicine for rare genetic and immune disorders.

“This occurrence of a single immune cell population loss in a person gives us invaluable insight into the important role that this cell type plays in human immune responses,” Dr Howson said.

Professor Cook said: “Human genomics is a powerful method for advancing our understanding of the complexity of immunity.

“Genome sequencing has emerged as a crucial tool for both diagnosis and discovery of immune-mediated disease.”

Read the paper titled: "Absence of mucosal-associated invariant T cells in a person with a homozygous point mutation in MR1” Science Immunology.