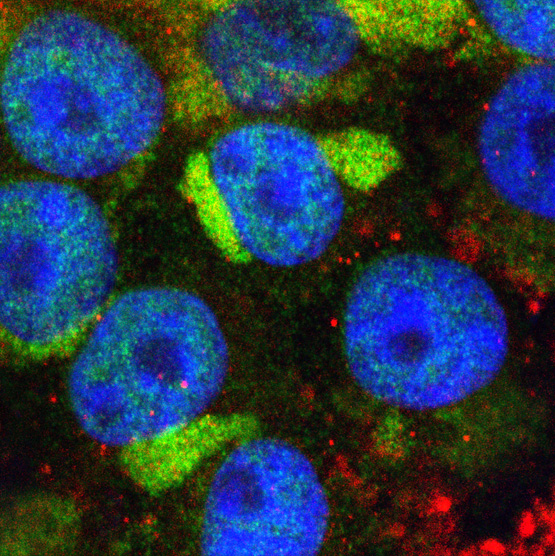 Monash University researchers have discovered a key way that one of the world’s deadliest pathogens, Ebola virus, evades the immune system.

Understanding this process  provides new potential targets for the future development of anti-viral therapies for a disease that killed over 11,000 people in an outbreak in West Africa between 2014 and 2016, with mortality rates in past outbreaks of 25 per cent to 90 per cent.

An outbreak of Ebola, for which treatment options are extremely limited, occurred earlier this year in the Democratic Republic of Congo. In common with viruses such as the Hendra and rabies viruses, Ebola infects humans from animals, with bats thought to be the natural hosts.

The research team, led by Dr Greg Moseley and Dr Angela Harrison from the Monash Biomedicine Discovery Institute, in collaboration with researchers at the Australian Centre for Disease Preparedness (ACDP, CSIRO) found that Ebola virus can block the function of the STAT3 protein, a critical ‘messenger’ protein that transmits signals within our cells important to regulating host immune and inflammatory responses against infections.

Importantly, using infections with pathogenic virus under the highest biocontainment level (BSL4) together with gene expression analysis and quantitative single cell imaging, the research team have discovered that STAT3 activity is antiviral toward Ebola virus, but that Ebola virus uses a protein called VP24 to target and disable STAT3’s messenger function through at least two different strategies, including binding to STAT3 protein complexes.

The findings were published today in the journal PLOS Pathogens.

The elucidation of this entirely new way for Ebola virus to disarm immune responses may provide new targets that can be used in research towards developing new anti-virals that prevent Ebola virus, and possibly other viruses, from interfering with the infected person’s antiviral system, allowing them to fight off the disease, according to Dr Moseley. “This shows us that Ebola virus uses more tricks to evade and dysregulate the immune system than we previously thought, and highlights the expanding importance of targeting of STAT3 by viruses. Understanding this process gives us new potential targets that might contribute to developing therapies that block the ability of Ebola and other viruses to shut down the immune response,” he said.

Importantly the STAT3 pathway is also involved in the pathogenesis of many other diseases, including cancers. Dr Moseley believes that understanding how Ebola virus and other viruses specifically target and modify STAT3 could also provide new directions for the development of therapeutics for diseases such as cancer.