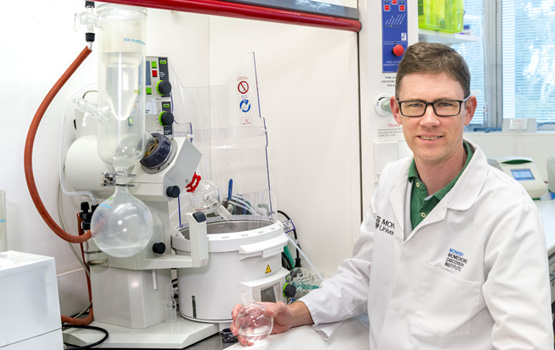 Peptides – short strings of amino acids – play a vital role in health and industry with a huge range of medical uses including in antibiotics, anti-inflammatory and anti-cancer drugs. They are also used in the cosmetics industry and for enhancing athletic performance.

Altering the structure of natural peptides to produce improved compounds is therefore of great interest to scientists and industry. But how the machineries that produce these peptides work still isn’t clearly understood.

The findings will allow Associate Professor Cryle to advance his lab’s work into re-engineering glycopeptide antibiotics to counter the pressing global threat posed by antimicrobial resistance, and more broadly to improving the properties of peptides generally.

“Peptide synthesis machineries are often largely modular assembly lines, with each module comprised of different component parts. Changing what you make in these assembly lines, that is, peptides with new bioactivities, is a ‘holy grail’ in re-design,” Associate Professor Cryle said.

“One of the things we tried to understand in this study was where the selectivity of these machineries come from – they’re very selective for making one specific peptide and understanding where this specificity comes from is a bit of a mystery,” he said.

“We were able to structurally characterise a part of such a machinery that generates the links within the peptides at a stage that hasn’t been previously determined. What we showed is that these domains responsible for the linking of amino acids into peptides don’t play a general role in selecting the amino acids during this process.

“This is good news from a re-engineering point of view because it means we don’t need to concern ourselves with changing multiple pieces of the machinery to make single amino acid changes, we just need to focus on changing the building block that goes in – and that’s quite promising.”

Associate Professor Cryle led a multidisciplinary team of scientists who enlisted a variety of techniques to model the peptide structures including using the Australian Synchrotron for X-ray crystallography along with chemical and biochemical techniques. He collaborated with groups in Canberra, Brisbane and Germany who helped with computational modelling and bioinformatics.

“Our ability to understand the enzymes that make natural peptides is key to our ability to produce improved ones to target issues like antimicrobial resistance,” he said. “Now we can actually start to think about ways to change the machinery’s acceptance of different building blocks and in this way we can make new peptides with improved antibacterial properties,” he said.

In the future, a collaboration with Dr Evi Stegmann’s group at the University of Tübingen in Germany will help translate the findings from a theoretical lab solution to eventually developing a commercial-scale production of new and improved antibiotics, he said.

Dr Thierry Izore, who has since left the Monash BDI to work at Medpace, and PhD student Candace Ho from the University of Warwick, UK, are equal first authors.

The work is linked to the University of Warwick, UK. Associate Professor Cryle is a member of the ARC Centre of Excellence for Innovations in Peptide and Protein Science.