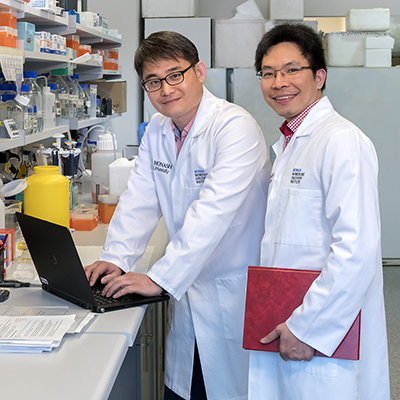 Doctors are turning to combination therapies - cocktails of drugs – in an effort to kill the cancer. However there is no reliable way to predict which combinations, amongst hundreds, will work (and work quickly) for an individual patient with triple negative breast cancer.

Monash researchers have used genetic and treatment data from triple negative cancer cells grown in the lab and from hundreds of patients world-wide to develop a computer program, which has revealed a previously unknown combination of drugs that may be the answer to the disease. Published today in the prestigious journal, PLOS Computational Biology, Dr Lan Nguyen from the Monash Biomedicine Discovery Institute, and his team, believes the computer model will eventually become an app that clinicians can use to match the best combinations of drugs for individual patients who present with the disease.

Triple negative breast cancer cells can develop resistance to a single targeted drug within days, sometimes hours – largely by re-routing the signaling pathways within the cells.

“It’s similar to when there’s a car accident, and the traffic manages to re-route itself around it without causing gridlock,” Dr Nguyen said.

“But how exactly these cancer cells find new routes to avoid the drug effect remains largely unknown,” he added.

The Monash team, in collaboration with colleagues at the Weizmann Institute in Israel, have characterised a key signaling network that drives the growth of triple negative breast cancers and developed a computer model that can predict how the network re-routes in response to a particular drug agent.

This new model and its predictions then allowed them to rank various combinations of drugs as to which are the most likely to defeat the cancer, by blocking the new route undertaken by the cancer cells. Using data from The Cancer Genome Atlas, a database of cancer genes and patient histories run by the National Institutes of Health in the US, the researchers tested their league table of drug combinations to determine their success in people who had survived triple negative breast cancer.

Importantly they can tell, by examining a patient’s genomic and proteomic information and inputting this information into their computer model, who may benefit from this drug combination and who may not – so that precious time is not lost in treating a patient with the wrong drugs.

The researchers found a previously unknown combination of two drugs which the model predicts could be successful in treating this previously untreatable disease, according to Dr Sung-Young Shin, first author on the paper.

“We hope to have this new combination in clinical trials in two to five years,” Dr Nguyen said.

The computer model can be adapted and used to determine effective drug combinations for other serious cancers, such as lung and melanoma, where network re-routing in order evade drug effect has been observed, he added.