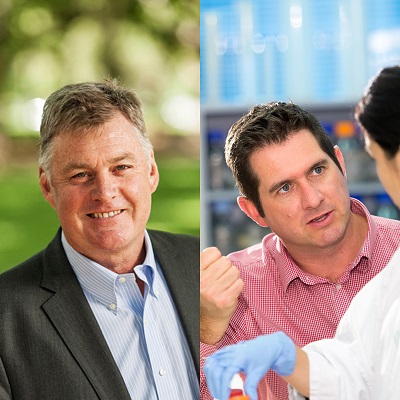 How a Monash BDI-brokered collaboration with a US biotechnology company is pushing a Monash discovery to clinical trial.

In 2014, Associate Professor Justin Hamilton approached Professor Mark Sleeman, Director of the Monash Antibody Technologies Facility (MATF), with a proposal. Associate Professor Hamilton, who heads a laboratory in Monash’s Australian Centre for Blood Diseases (ACBD), wanted to use a technology platform the facility had licensed to further his work into a promising anti-thrombotic agent and to jointly apply for seed funding to do this.

The platform, called VelocImmune® and licensed from Regeneron, the US biopharma company that invented the novel technology, uses genetically modified mice to make fully human antibodies, shearing years off the development of human antibodies to be used for therapeutics. VelocImmune® had been licensed to Monash under the oversight of Professor Sleeman, who had worked for 13 years at Regeneron before coming to Monash in 2011. He is the Executive Director of Industry Engagement at the Monash Biomedicine Discovery Institute and a researcher in physiology, among other roles.

“When I left Regeneron, I was very interested in bringing the whole technology platform to Australia and particularly to Monash,” Professor Sleeman said.

“You can make the antibodies and test if they are doing the things you want them to do. The advantage is that you’re collaborating with a biopharma company, which means that if you want to commercialise, you may have a commercial partner,” he said.

“We removed the gene for this receptor in mice and found they were protected against the blood clots that cause heart attack and stroke,” Associate Professor Hamilton said.

Arterial thrombosis causes heart attacks and ischaemic strokes and is by far the most common cause of death and disability in the world, accounting for almost 40per cent of deaths in many countries including Australia.

“But I think we can do better than that,” he said.

“Would you mind if we pitch it to Regeneron?”

Scientists at the company were keen; Associate Professor Hamilton was thrilled.

The deal marked the first time VelocImmune® had been used outside the United States by an academic institution.

“It was not a large amount of money in the scheme of the whole project – $15,000 – but we wouldn’t have been able to start this project were it not for that initial investment from Monash,” he said.

He had been working on the PAR family for almost 20 years, eventually homing in on PAR4, the last in the family. But translating his preclinical work to humans had proved problematic; medicinal chemists brought in to build drugs targeting the receptor found it was difficult to block. It was discovered in clinical trials elsewhere that a mutation in the receptor thwarted the antagonist, meaning that between 20per cent and 80per cent of people might not benefit from the drug involved.

“That’s when our work with Regeneron began,” he said.

Regeneron provided the mice free of cost with the proviso that it had first rights on developing any therapeutic that resulted from the research.

The researchers used the Antibody Technology Facility, which can rapidly process thousands of antibody-producing cells, to conduct initial screening to see if the antibodies worked.

“As a result we’ve produced a suite of antibodies of varying characteristics which are blocking the receptor as we hoped, several of which look very appealing from a clinical development perspective,” Associate Professor Hamilton said.

The antibodies then proved to be strongly anti-thrombotic in human blood (taken out of the body). Importantly, they did not discriminate between the individuals with the mutation or not.

“This is a huge advantage over any other drugs,” he said.

In 2017 the collaborators submitted a package of data demonstrating they had validated the relevant antibodies and gained a National Health and Medical Research Council (NHMRC) Development Grant.

“The NHMRC funding for development is crucial because we were able to employ high-level staff like post-doctoral researchers to drill down and explore 30 to 50 antibodies to find the best ones. It’s incredibly costly to develop antibodies,” Professor Sleeman said.

“We were able to identify a full library of antibodies and are characterising them,” he said.

Monash is pursuing patenting on certain antibodies in anticipation of their use in clinical trials as therapeutic agents.

“We’re hopeful we’re going to be able to develop a clinical plan with Regeneron to do the first in-human trials here,” Professor Sleeman said.

“There’s a high clinical or unmet need for better anti-thrombotics out there so this is really something that is high-value,” he said.

The researchers will now ask opinion leaders in haematology and thrombosis at the Alfred Hospital their ideas on developing a clinical plan towards human trials.

Professor Harshal Nandurkar, haematologist and Head of the Australian Centre for Blood Diseases, is another key figure in the project, contributing both clinical and research expertise to it.

“The PAR family of receptors are important in platelet activation and are an excellent target for drug development. The key advantage of the drug developed by Associate Professor Hamilton is that it can be effective in all variations of the receptor, unlike one of the current drugs,” Professor Nandurkar said.

“The ambition here is to develop a drug that is effective in patients with high-risk cardiovascular disease but with minimal bleeding complications,” he said.

The PAR4 project has demonstrated amply the value of basic researchers working with clinical units and clinicians, combining the haematological expertise at the ACBD, Professor Sleeman and his team’s expertise in monoclonal antibody production, and the backing of Regeneron, which has decades of experience in researching and developing therapeutic antibodies.

“Regeneron is focused on identifying the key hurdles and requirements to getting a drug through the early stage, which is a very different way of thinking compared with the research my lab would traditionally do,” Associate Professor Hamilton said.

“That has certainly helped in the process,” he said.

Associate Professor Hamilton is excited about the prospect of clinical trials into PAR4.

“Ultimately everything we’re trying to do is directed at improving the prevention and treatment of disease,” he said “This project is very close – you don’t get many opportunities in a scientific career to achieve those goals.”

Many other researchers have been part of the process, including Dr Shauna French, who conducted her PhD at the ACBD in PAR4, and Drs Claudia Thalmann and Joanne Casey from Professor Sleeman’s lab and the MATF team.

“You can feel the excitement in the teams who have worked on the project, knowing that we’re within touching distance of achieving our goal,” Associate Professor Hamilton said.