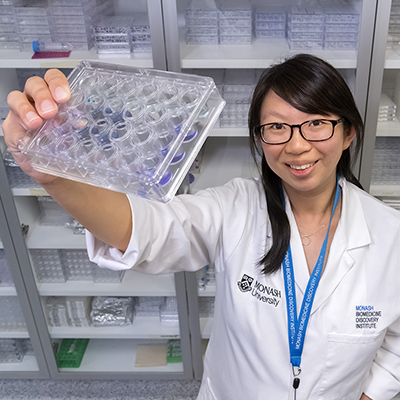 A study by researchers in the Monash Biomedicine Discovery Institute’s (BDI) Infection and Immunity Program has shed light on the structures behind the genetic factor that predisposes people to getting the autoimmune disease rheumatoid arthritis (RA).

The study by first author Dr Yi Tian Ting has been ranked an ‘Editors’ Pick’, among the top-rated papers published by the peer-reviewed ‘Journal of Biological Chemistry’.

“It’s quite an honour to be among the 50 to 100 selected out of 6600 papers published each year,” said Dr Ting, who is profiled in the journal.

“For our article to be recognised among the leading publications that have contributed to this field is always good,” she said.

The researchers investigated the protein MHC Class II, an immune receptor that acts as a sentinel by protecting the body against microbial infection. It does this by presenting small protein molecules from pathogens on its surface, which are subsequently recognised as a threat by cells of the immune system. This in turn leads to an inflammatory response to kill the invading infectious organism.

In autoimmune disease, including rheumatoid arthritis, this can go wrong and the body fails to differentiate between self and foreign protein molecules. In RA, MHC Class II binds to protein molecules from the joint or cartilage that has been modified during inflammation, leading to a damaging auto-immune response.

Although MHC Class II has several subtypes, found in different individuals, certain subtypes are common to RA. This study showed that joint/cartilage-derived protein molecules bound to these RA-associated MHC Class II subtypes in a highly similar way. This makes the binding region common to all a possible target for treatment; a single key that could unlock a common treatment.

The investigators used protein crystallography, a powerful technique allowing them to crystallise the MHC Class II molecule with the bound protein molecules. The crystals were then exposed to radiation at the Australian Synchrotron. The resulting diffraction pattern was used to produce a 3D ‘map’ of the MHC Class II that showed ‘binding pockets’ that might be targeted by potential drugs to prevent the self-proteins from binding.

“Identifying the differences between these subtypes on a molecular basis means that treatment in the future could be more efficient and personalised,” Dr Ting said.

“This may provide insight to why some patients would respond better or worse than others to a particular treatment based on the MHC Class II subtypes they inherited, which are associated with severity and progression of rheumatoid arthritis,” she said.

Currently there is no cure for RA, a complex and debilitating disease.

To read the paper online: ‘The interplay between citrullination and HLA-DRB1 polymorphism in shaping peptide binding hierarchies in Rheumatoid Arthritis’