Monash University’s Biomedicine Discovery Instituteresearcher Associate Professor Stephanie Gras has been honoured with a Georgina Sweet Award for Women in Quantitative Biomedical Science for excellence in the field.

Group leader and Monash Senior Research Fellow in the Department of Biochemistry and Molecular Biology, she was one of three women who won the award, which has a prize of $25,000.

“It’s a great recognition of my career so far and my work in biomedical research, particularly because the award application is reviewed by peers,” Associate Professor Gras said.

“It’s also great to have the opportunity to lead the way for women in science and make sure we can inspire young women to enter science as a career,” she said.

The awards were presented at a ceremony at the Bio21 Institute, University of Melbourne, attended by a number of high-powered female scientists. Professor Anne Kelso AO, Chief Executive Officer of NHMRC, was guest speaker while Professor Edwina Cornish AO, La Trobe Council member and former Provost, Monash University, led a discussion. Professor Christina Mitchell, Dean of the Faculty of Medicine, Nursing and Health Sciences at Monash attended. Associate Professor Gras, who was returning from a holiday, spoke by video, then arrived in time to join the celebratory dinner.

Associate Professor Gras, who is investigating how the immune system can be boosted to counter viruses including influenza and HIV, has several women in her team and plans to use part of the award to ensure they go to conferences next year.

“It gives me the opportunity to snowball the award to make my contribution to supporting women in science,” she said.

She is following a fine tradition: the Georgina Sweet Awards were created by Professor Leann Tilley as part of her Australian Research Council Laureate Fellowship program to promote and support female scientists who demonstrate excellence in the area of Quantitative Biomedical Science.

The pioneering Dr Georgina Sweet, who became Australia's first Doctor of Science in 1904, was an academic in zoology and parasitology at the University of Melbourne. The Georgina Sweet Australian Laureate Fellowship was created by the Australian Research Council in 2010 to recognise her contribution to science.

“I strongly encourage women scientists at Monash to apply for the fellowship, it’s a fantastic opportunity,” Associate Professor Gras said. 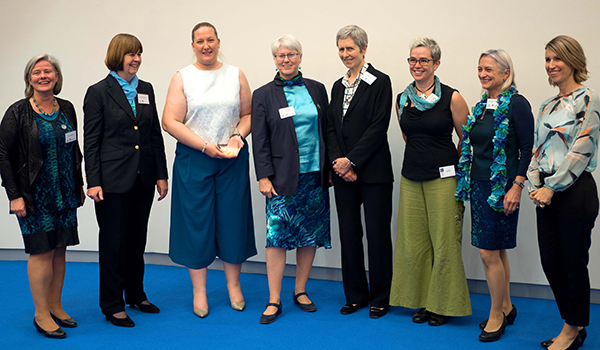