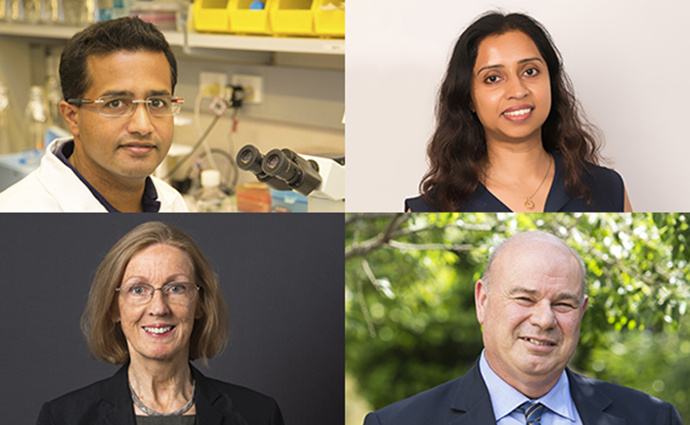 Dr Sanjaya Kuruppu, a researcher from the Monash Biomedicine Discovery Institute (BDI) is the only Australian to gain a highly sought-after National Institutes of Health (NIH) grant in the current funding round. Moreover, Dr Kuruppu was one of only 20 scientists globally to gain one of these NIH grants.

Dr Kuruppu is leading a team investigating a novel molecule derived from snake venom that holds promise as a way of countering the toxic protein ‘amyloid beta’, which is linked to Alzheimer’s disease. The molecule stimulates the activity of two enzymes that clear amyloid beta.

He will work with co-lead investigators Professor Ian Smith, Monash Vice-Provost (Research and Research Infrastructure), Professor Helena Parkington, an expert in the field of in vitro brain electrical activity and in vivo behavioural studies at the Monash BDI, and Dr Niwanthi Rajapakse, senior lecturer at the University of Queensland, who was instrumental in the molecule’s discovery two years ago.

“I was delighted to hear I was awarded this grant,” Dr Kuruppu said.

“It was a fantastic achievement – we’ve been putting in a lot of effort over two years, trying to get all the preliminary data supporting our hypothesis. It was great to see it all pay off!” he said.

“We are testing a potential novel approach where we try to increase the activity of enzymes that break down amyloid beta deposits in the brain, a hallmark of Alzheimer’s disease. The original molecule was isolated from a snake venom, and we have now made synthetic version with the same effect.”

The team will collaborate with Professor Mibel Aguilar, a leading peptide chemist at Monash University, and Professor Ralph Martins AO, a leading authority in the field of Alzheimer’s disease, who holds a joint appointment at Edith Cowan University in Western Australia and Macquarie University in New South Wales. Professor Martins recently contributed to a landmark study published in Nature, which validated a panel of blood-based molecules that can predict brain amyloid beta levels. This discovery will add more value to the work conducted by scientists at Monash University.

“The funding will enable us to try and make this molecule more suitable for use in a clinical setting,” Dr Kuruppu said.

“We want to further optimise it to increase its stability in plasma and other bodily fluids, increase its selectivity for the enzymes that are most involved in breaking down amyloid beta, and also to modify it so it can cross the blood-brain barrier. It is great to see our work being recognised and funded by the NIH, as it provides us with great confidence to take this work forward,” he said.

Importantly, the researchers want to test the molecule in a mouse model of Alzheimer’s disease, checking not only for its effect on amyloid beta build-up but on memory and learning. They will also test whether responses are the same in male and female mice; the NIH is keen to investigate gender as a variable in disease treatment.

“First we need to have proof of concept that this approach of increasing the activity of these enzymes is going to work,” Dr Kuruppu said.

“That would be a world first. No one’s tried this approach before,” he said.

This R03 grant will allow the scientists to cover the costs of animal studies into the molecule, consumables, and will go towards conducting studies using Monash Technology Research Platforms.