Worm gene could be key to developing obesity treatment 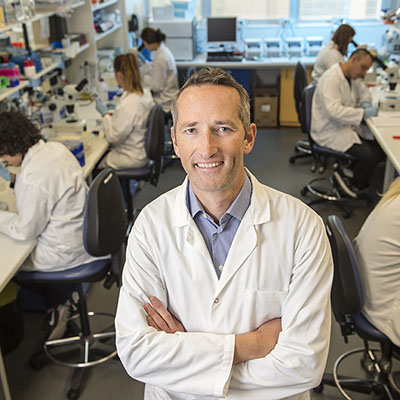 Monash University and Danish researchers have discovered a gene in worms that could help break the cycle of overeating and under-exercising that can lead to obesity.

The team has discovered a gene that triggers a feeling of fullness, as well as the need to sleep after eating. A similar gene is found in people, opening up the potential to develop a drug that could help control obesity by reducing appetite and increasing the desire for exercise.

The team, led by Associate Professor Roger Pocock at the Monash Biomedicine Discovery Institute and the University of Copenhagen, published their results today in the Proceedings of the National Academy of Sciences, a prestigious US journal.

“When animals are malnourished they seek out food by roaming their environment. When they’re well fed they have no need to roam, and when they’re fully sated they enter a sleep-like state,” Associate Professor Pocock said.

The researchers studied Caenorhabditis elegans, or the roundworm, because of the comparative simplicity of its brain – it has just 302 neurons and 8,000 synapses, or neuron-to-neuron connections, all of which have been mapped. Compare this with the human brain which has billions of neurons, more than 160,000 kilometres of biological wiring, and 100 trillion synapses.

Associate Professor Pocock said the roundworm and humans share up to 80 per cent of their genes, as well as around half of all the known genes which are involved in human diseases.

"Because roundworms share so many genes with humans they are a great model system to investigate and gain a better understanding of processes like metabolism as well as diseases in humans,” he said.

The researchers discovered the role of the transcription factor ETS-5 by analysing single neurons within the brain of the worm, monitoring its response to food. They found that – much like mammals including humans – a diet that supports growth elicits a different response in worms compared with low quality food. In mammals, a diet loaded with fats and sugars stimulates overfeeding, leading to obesity. When fed on low quality food the worms roamed in search of better nutrition.

The discovery of ETS-5 is the first time a gene regulatory molecule of this type, and potential drug target, has been implicated in the brain-intestinal control of eating and activity, according to Associate Professor Pocock.

“The ETS family of genes is present in humans and has previously been linked to obesity regulation. Now that we’ve learned this gene family controls food intake through a feedback system to the brain, it represents a credible drug target for the treatment of obesity,” he said.