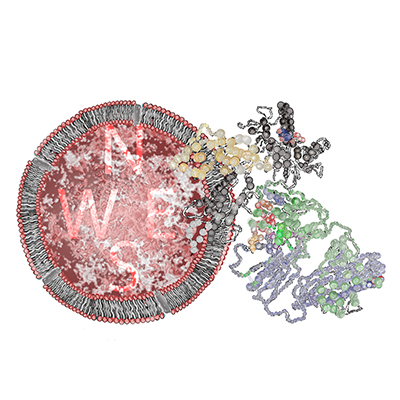 T cells represent a key component of our immune system, and play a critical role in protecting us against harmful pathogens like viruses and bacteria, and cancers. The more we understand about how they recognise, interact with and even kill infected or cancer cells moves us closer to developing therapies and treatments for a range of conditions.

In a paper published today in the premier international journal Science, an Australian team of scientists led by Monash University, the Australian Research Council Centre of Excellence in Advanced Molecular Imaging and the University of Melbourne at the Doherty Institute, has redefined what we thought we knew about T cell recognition for the past 20 years.

In order to interact with other cells in the body, T cells rely on specialised receptors known as T cell receptors that recognise virus or bacteria fragments that are bound to specialised molecules called major histocompatibility complex (MHC) or MHC-like. Over the past 20 years, the prevailing view was that T cell receptor sat atop the MHC and MHC-like molecules for recognition.

The team of scientists characterised a new population within a poorly understood class of T cells called gamma delta T cells that can recognise an MHC-like molecule known as MR1. Using a high intensity X-ray beam at the Australian Synchrotron, the scientists obtained a detailed 3D image of the interplay between the gamma delta T cell receptor and MR1 revealing an intriguing result whereby the gamma delta T cell receptor bound underneath the MHC-like molecule for recognition. This highly unusual recognition mechanism reshapes our understanding of how T cell receptors can interact with their target molecules, and represents a major development in the field of T cell biology.

"Think of it like a flag attached to a cell. We always thought the T cells were coming along and reading that flag by sitting atop it. We have determined that instead, some T cells can approach and interact with it from underneath," said Dr Jérôme Le Nours from the Monash Biomedicine Discovery Institute, co-lead author on the paper.

"These are the types of fine and important details that can change how we approach future research avenues in T cell biology," said Dr Le Nours.

“This is important because T cells are a critical weapon in our immune system, and understanding how they target and interact with cells is crucial to harnessing their power in therapies such as infection and cancer immunotherapy,” he said.

”Our study shows that MR1 is a new type of molecular target for gamma delta T cells. These cells play a decisive role in immunity to infection and cancer, yet what they respond to is poorly understood. MR1 may be signalling to gamma detla T cells that there is a virus, or cancer cell and triggering these cells to initiate a protective immune response,” said Dr Nicholas Gherardin from the Doherty Institute, co-lead author on the paper.

“We’re very excited to follow up these findings in studies that will aim to harness this new biology in disease settings,” he said.

Read the full paper in Science titled A class of γδ T cell receptors recognize the underside of the antigen-presenting molecule MR1.

About the ARC Centre of Excellence in Advanced Molecular Imaging
The $39 million ARC-funded Imaging CoE develops and uses innovative imaging technologies to visualise the molecular interactions that underpin the immune system. Featuring an internationally renowned team of lead scientists across five major Australian Universities and academic and commercial partners globally, the Centre uses a truly multi-scale and programmatic approach to imaging to deliver maximum impact. The Imaging CoE is headquartered at Monash University with four collaborating organisations – La Trobe University, the University of Melbourne, University of New South Wales and the University of Queensland.

About the Monash Biomedicine Discovery Institute
Committed to making the discoveries that will relieve the future burden of disease, the newly established Monash Biomedicine Discovery Institute at Monash University brings together more than 120 internationally-renowned research teams. Our researchers are supported by world-class technology and infrastructure, and partner with industry, clinicians and researchers internationally to enhance lives through discovery.

About the Peter Doherty Institute for Infection and Immunity
Finding solutions to prevent, treat and cure infectious diseases and understanding the complexities of the immune system requires innovative approaches and concentrated effort. This is why The University of Melbourne – a world leader in education, teaching and research excellence – and The Royal Melbourne Hospital – an internationally renowned institution providing outstanding care, treatment and medical research – have partnered to create the Peter Doherty Institute for Infection and Immunity (Doherty Institute); a centre of excellence where leading scientists and clinicians collaborate to improve human health globally.