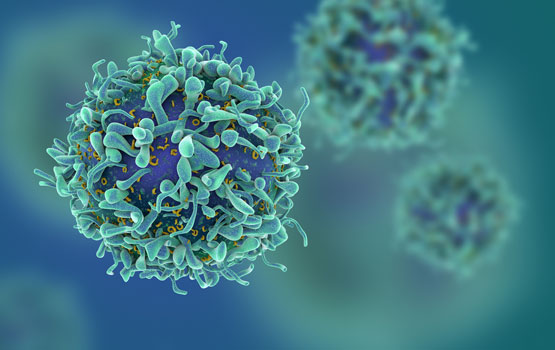 Communication, serendipity and an enzyme called DOT1L have all combined to produce some exciting findings into the immune system’s B cells and T cells by two groups of Monash Biomedicine Discovery Institute (BDI) scientists. These could result in further studies into a target for asthma and allergies, and fundamental work exploring the formation of immunity itself.

Two papers on DOT1L by teams led by Professor Colby Zaph and Associate Professor Kim Good-Jacobson – whose labs are next door to each other – were each published in Cell Reports today.

Professor Zaph found that the enzyme was critical in controlling how T cells – white blood cells critical for immunity to infections – make the choice to develop into distinct subsets.

T cells have the ability to adopt a variety of fates that depend on the type of infection they face. Type 1 T cells (Th1) for example are critical for clearing viral infections, while type 2 (Th2) T cells are required for immunity to worm parasites. Critically, dysregulated Th1 cells can cause diseases such as inflammatory bowel disease, diabetes and arthritis, and uncontrolled Th2 cell responses can lead to asthma and allergies.

Professor Zaph said the fundamental research began with a collaboration with the Structural Genomics Consortium, a public-private partnership that creates and freely distributes chemical inhibitors of enzymes.

“It was a classic fishing experiment,” he said. “We just thought we’d see what changed when we put the inhibitor with the T cells. For a lot of these enzymes nothing changed at all but the DOT1L inhibitor really changed the function of the T cells making them hyper-functional.

“What we found for the first time was that this protein DOT1L was critical for T cell differentiation and activating T cell function,” he said.

In this new study, the researchers found that genetically eliminating DOT1L in preclinical models led to the naïve T cells all becoming type 1 cells, which meant the cells were unable to clear worm infections but were good in countering viral infections.

“DOT1L is now a potential target not only to promote type 1 immune responses for vaccine responses for viruses but could also be a good way to reduce type 2 response, which is good for clearing worms,” Professor Colby said.

“We also showed that in the absence of DOT1L you don’t get asthma developing in preclinical models or the lung inflammation that causes allergies, making DOT1L a nice target to look at in future studies in asthma pathways.”

First author on the paper was Dr Sebastian Scheer.

The findings highlighted the fact that the same protein could have multiple effects under different conditions suggesting that care be taken in clinical trials. Associate Professor Good-Jacobson’s research also underscored this and, like Professor Colby’s, emphasised the importance of DOT1L.

“There are a number of drugs in early clinical trials to target DOT1L for acute lymphoblastic leukaemia, but there is little known about how turning DOT1L off would effect the ability of B cells to form antibodies,” she said.

Associate Professor Good-Jacobson said earlier work by her team had found that certain types of B cells expressed DOT1L. “That finding, combined with early work that Colby had done into the specific role of T cells, gave us impetus to investigate whether it was essential for B cells,” she said.

B cells are critical in protecting us from viral infections. Their protective power comes from producing antibodies to help clear an infection, and immune memory cells that respond rapidly to prevent illness if you are reinfected. The formation of antibodies underpins the vast majority of vaccines.

Research by Associate Professor Good-Jacobson’s team revealed that DOT1L was critical to turning on an effective B cell response during infection or in response to immunisation.

“What we found was that if B cells didn’t have DOT1L they were able to be turned on by infection but the engine would sputter out, they’d get to a certain point in forming an antibody response but couldn’t go any further – they are completely shut down before productive antibody and immune memory can be formed,” she said.

“If you’re going to use a drug that that stops DOT1L from functioning it’s really important to know what it’s actually regulating because it’s critical for the body to mount an effective antibody response to infection. You’re going to have problems fighting off infection down the track if you’re using these drugs.”

Understanding how B cells are regulated during the early part of the immune response was critical from a fundamental biological perspective, Associate Professor Good-Jacobson said.

“Our next step is to look at this molecule in the formation of immunity itself,” she said.

Associate Professor Good-Jacobson’s team will also interrogate DOT1L for its role in driving oncogenic genes in a number of B cell-derived cancers.