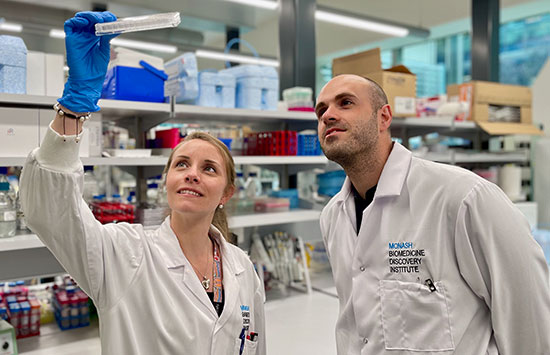 Monash University’s Biomedicine Discovery Institute researchers have made a vital breakthrough in the understanding of a new facet of the immune response to malaria, which will help in the development of a vaccine.

Malaria is caused by an infection with a deadly parasite species called Plasmodium falciparum and although it is one of the world’s most prevalent global diseases, efforts to develop an effective vaccine have been restricted by a lack of understanding of the immune response that drives immunity. The World Health Organization estimates there are 200 million infections and 500,000 deaths each year as a direct result of malaria.

By using human samples from clinical trials exploring the natural immune response to malaria, the scientists were able to obtain a detailed map of how gamma delta T cells and the gamma delta TCR respond to repeated seasonal and experimental P. falciparum infections.

While many aspects of the immune system’s defence mechanisms are actively avoided or dampened by the complex life cycle of P. falciparum, gamma delta T cells were highly responsive and evolved to tolerate repeated P. falciparum infections. This work reshapes the understanding of how these T cells interact with dangerous pathogens and provides new avenues for future discoveries.

The findings are published today in Science Translational Medicine.

Dr von Borstel, a postdoctoral research fellow in the Davey lab, said: “Our findings that gamma delta T cells are an important component of an effective immune response to malaria will be very important for the development of future vaccines.

“Gamma delta T cells are not very well understood and our findings show that the gamma delta TCR is critical to their response to malaria which will open new areas to harness these cells for infectious diseases.”

Lead author Dr Davey said: “These cells have long been thought to be involved in immunity to malaria, but their potential role and how they do this has not been elucidated. This international study provides a breakthrough in our understanding of gamma delta T cell immunity and evidence for their vital importance in combating infectious pathogens.

“These are important T cells that form a major component of the immune response to malaria. With a greater understanding of how our immune system operates in response to infectious disease, we can reveal crucial factors that can be delivered by next-generation vaccines.”