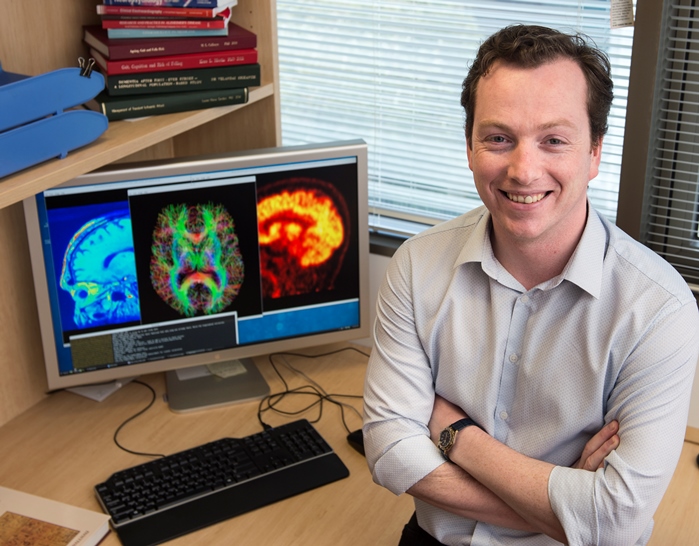 Until Chris started his advanced training in geriatrics he hadn’t developed much of an interest in research.

Fortunately one of the requirements of his advanced training was a research project investigating the complications of cervical spine fractures in older people, and thanks to his supervisors the experience was very positive.

“That’s when I got the research bug,” said Dr Chris Moran, a geriatrician at Monash Health.

“I started to see that rather than just doing the clinical work, you can actually contribute to what that clinical work could be—it’s much bigger picture.”

“Although my project at the time was small, I was speaking to people who shaped practice; they helped generate guidelines and influenced policy.”

Chris enjoyed being part of the conversation so much that he decided to explore further opportunities in research.

Under the supervision of Associate Professor Velandai Srikanth and Professor Thanh Phan from the Stroke and Ageing Research Group in the School of Clinical Sciences at Monash Health, Chris has recently completed his PhD, having investigated the links between type 2 diabetes and dementia.

With our ageing population and obesity epidemic, diabetes and dementia are both very common diseases.

“Around 10 to 15 years ago, we started to realise diabetes increases the risk of dementia,” said Chris. “I’m interested in the how and the why that happens.”

Chris hopes that gaining an understanding of these pathways may help explain why dementia is so common, and not just in people with diabetes.

Having caught the research bug, Chris is looking forward to furthering his research in the School of Clinical Sciences while continuing his clinical work. Chris also believes his research experience has made him a much better doctor.

“As doctors we make a lot of decisions based on published research,” said Chris.

“Now that I’ve critically read a lot of papers and also published a number of my own, I can interpret research in a much more robust way than I used to.”

“Many physicians make clinical decisions, relying on guidelines, consensus and expert opinion which sometimes have limitations.”