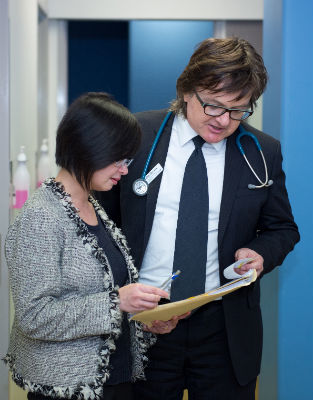 We're currently undertaking one of the largest lupus-centric clinical studies ever completed, and we're leading the way in establishing the Australian Lupus Registry to fast-track access to data and accelerate research. Our laboratory teams are looking at the role multiple immune system proteins play in controlling lupus, and uncovering evidence to help predict more severe complications such as kidney (renal) disease in patients suffering from lupus. Combining clinical and laboratory research in one team is one of the things that makes our approach special.

Recent years have seen a surge of clinical development in SLE, culminating in the approval of the anti-BAFF monoclonal antibody belimumab in 2012 and multiple late stage clinical programs from many pharmaceutical companies. When novel therapies come to market, their place in the clinician's armament can be uncertain - the absence of clear treatment protocols and validated goals muddies the measure of success. Likewise the diversity of clinical features of active SLE has made quantification of disease activity problematic. Although there are a number of published systems in use to measure SLE disease activity, there are widely acknowledged problems with these instruments.

Our approach is towards better identification of causative factors of SLE, allowing for:

We are the leading investigator of the contribution to rheumatic diseases of the cytokine macrophage migration inhibitory factor (MIF).  This proinflammatory cytokine modulates glucocorticoid sensitivity.  Most recently we have been investigating the signal transduction pathways operative in the regulation of cell activation and glucocorticoid interactions by MIF.

The Arthritis Group is also interested in the contribution of annexin I (lipocortin 1) to the regulation of the inflammatory response.  Our lab is now the leading investigator of the role of annexin I in arthritis in the world.  Our work includes the first description of annexin I expression in human RA, and the first reports of its role in the control of inflammation in animal models of RA.

More recently we have been exploring additional novel glucocorticoids-regulated molecules including MKP1 and GILZ, both of which we have been first to report in arthritis.

In rheumatoid arthritis (RA)  ‘treat-to-target' approaches have been widely adopted on the basis of  studies demonstrating that achieving a low disease activity state (LDAS)  results in greatly improved patient outcomes. The adoption of treat-to-target approaches has contributed to the high update of biological  therapies in RA, and to major improvements in patient well-being.

Unlike the situation in RA, there is no system that defines a goal of  treatment, e.g. LDAS. A published definition of remission in SLE was so  stringent that it was met by less than 2 per cent of patients,  suggesting that a lupus low disease activity state (LLDAS) target is  more feasible.

The SLE Treat-to-Target task force recently described the need to  urgently and empirically define a low disease activity state in SLE - a  major solicited review article (Franklyn, Morand, et al; Nature Reviews  Rheumatology, in press) and large multinational study are under way to  define a better way to address this.