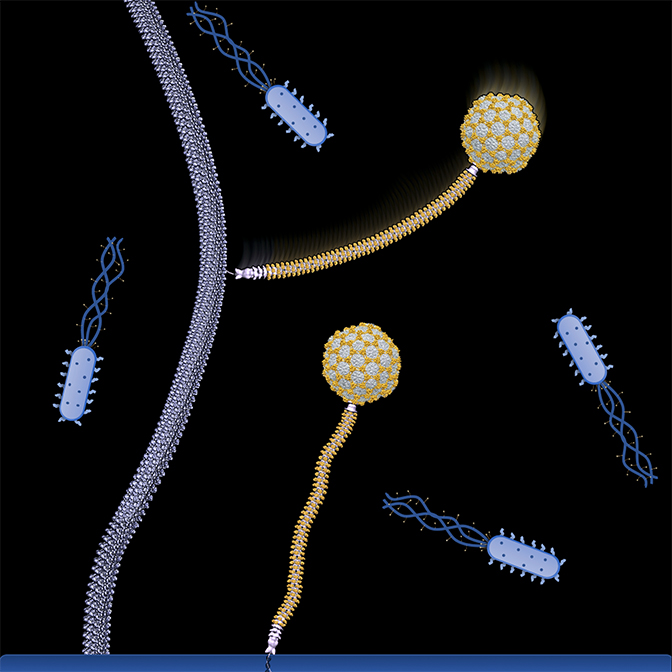 A research collaboration involving Monash University has made an exciting discovery that may eventually lead to targeted treatments to combat drug-resistant bacterial infections, one of the greatest threats to global health.

The study, led by Monash Biomedicine Discovery Institute’s Associate Professor Fasséli Coulibaly and Professor Trevor Lithgow is published in Nature Communications.  It outlines the use of high-resolution imaging to uncover how viruses known as phages can attack and kill Salmonella Typhi, the causative agent of typhoid, providing scientists with a new understanding of how they can be used in the ongoing fight against antimicrobial resistance (AMR).

The study was a collaboration between researchers at the Monash Biomedicine Discovery Institute (BDI), the Monash University Centre to Impact AMR and the University of Cambridge.

What they saw was an incredible “choreography” by the phages as they assembled the main components of their particles: a head filled with the viral DNA and a tail used to infect the bacteria.

“We saw how the building blocks of the particle interlock in an intricate choreography. At a molecular level, arms swing out and curl around each other forming a continuous chain that braces the head of the phage,” Associate Professor Coulibaly said.

“This rigid chainmail provides further protection to the DNA of the phage. Surprisingly, the tail on the other hand remains flexible. It’s able to bend and not break as it captures the bacteria and ultimately injects them with the phage DNA.”

Phages are a class of viruses that infect bacteria, and each phage is specific for the species of bacteria it can kill. Phages can be purified to a point of being FDA-approved for treatment of people with bacterial infections, and documented success has been had in the USA, Europe and, recently, Australia.

At Monash University, the Centre to Impact AMR is grappling with these issues and is looking at the types of phages needed for new, “phage therapies” to treat bacterial infections.

“This finding will help us overcome one of the most critical hurdles in phage therapies which is a precise understanding of how phage work, in order to predict in advance and select with accuracy the best phage for each patient infection,” Professor Lithgow said.

“It could help move phage therapies from compassionate use, where all other treatment options have been exhausted, to more widespread clinical use.”

Antimicrobial resistance (AMR) is one of the biggest threats to global health, food security and economic development. It is a pressing health and humanitarian crisis in Asia, that is increasing in severity globally.

AMR affects all aspects of society and is driven by many interconnected factors including antibiotic overuse, and the rapidly adaptive nature of bacteria to evolve into drug-resistant forms. At-risk groups for AMR infections are many, and include COVID-19 patients on respirators, mothers and children during childbirth, surgery patients, people with cancer and chronic disease and the elderly.

The first authors of this study Dr Joshua Hardy and Dr Rhys Dunstan used the Ramaciotti centre for cryo-electron microscopy at Monash University, the Monash molecular crystallisation facility, and the Australian Synchrotron for the structure determination.

Read the full paper in Nature Communications titled The architecture and stabilisation of flagellotropic tailed bacteriophages.