Antidepressant pollutants in waterways are destroying the social dynamics of fish, study finds 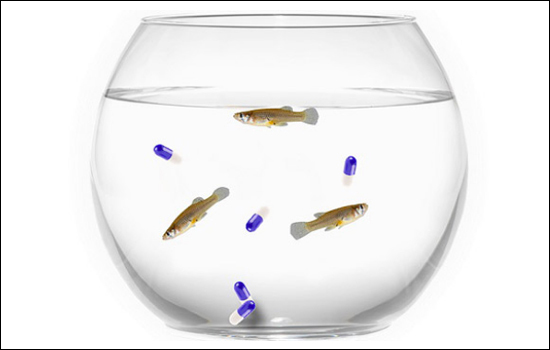 The Monash scientists who found that pharmaceutical pollutants in waterways altered reproductive behaviour, anxiety levels, activity, and antipredator responses of fish have now discovered for the first time that such toxicity is also having a disturbing impact on the social behaviour of fish.

The new findings are published today in Biology Letters and coincide with a recent gathering of world experts to discuss the impacts of pharmaceutical waste on wildlife and how government agencies can draw on behavioural studies to monitor and regulate chemical pollutants in the environment.

Psychoactive pollutants such as antidepressants, are increasingly detected in the environment and have long been shown to disrupt the behaviour of non-target species.

“However, few studies have considered how the response of exposed organisms might be mediated by social context,” said lead study author Dr Jake Martin from the Monash University School of Biological Sciences.

“Our research found that the antidepressant pollutant, fluoxetine (commonly marketed as Prozac™), did not alter behaviour of solitary fish but in a group setting, fluoxetine exposure disrupted the frequency of aggressive interactions and food consumption,” he said.

“The results are significant because they suggest that behavioural tests in social isolation may not accurately predict the environmental risk of chemical pollutants for group-living species and highlight the potential for social context to mediate the effects of psychoactive pollutants in exposed wildlife.”

The research team investigated the impacts of two concentrations of fluoxetine on foraging behaviour in fish (Gambusia holbrooki), tested individually or in a group.

They found that the effect of fluoxetine exposure on fish foraging behaviour depended on the social context.

“But in our study we found that fluoxetine affected foraging dynamics in social trials.”

“Fluoxetine exposure disrupted the relationship between the total number of prey consumed and standard deviation in group weight.”

Female mosquitofish used in the study were collected from a wild population and transported to Monash University, where they were acclimated to laboratory conditions for one month.

The researchers used only one sex to control for any effects of sexual behaviour that may have confounded the results.

Female mosquitofish were used as they show a stronger tendency to form shoals than males.

After acclimation to laboratory conditions, fish were randomly allocated to one of three treatments for 28 days (unexposed, low-fluoxetine or high-fluoxetine).  A 28-day exposure was selected as the therapeutic benefits of fluoxetine are known to take three to four weeks to manifest.

“Our results suggest that social context may be an important, but underappreciated, factor influencing the ecological impacts of chemical pollutants on wildlife,” Dr Martin said.