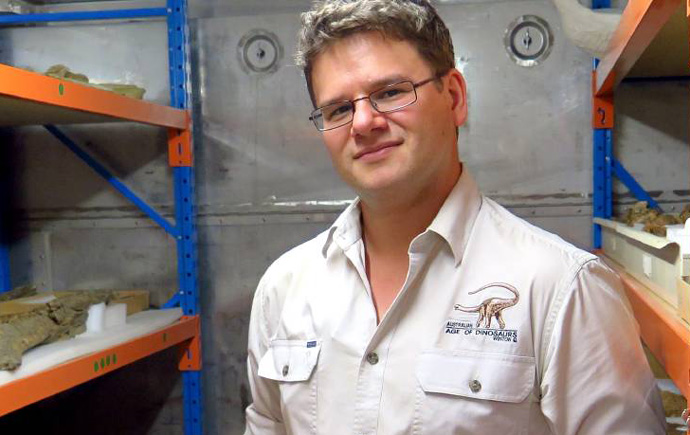 Palaeontologist Dr Stephen Poropat is living his dream as dinosaurs were a childhood passion.

Stephen can trace his passion for the “terrible lizard” to his early childhood when he was given a picture book that depicted dinosaurs in fascinating detail. He was enthralled. Soon after, a dinosaur themed school week sealed the deal. He was going to be a Palaeontologist. Two decades on and Poropat is a postdoctoral research fellow at Uppsala University, Sweden, where he researches Cretaceous sauropod dinosaurs. He is kept on his toes, spending six months of the year at Uppsala and the remaining six months in the Australian outback working with the Australian Age of Dinosaurs project. Based near Winton, 1500km north-west of Brisbane, the Australian Age of Dinosaurs Natural History Museum attracts almost 18,000 people a year.

"Science has given me an appreciation for the world we live in. It has shown me how it works, and how it has evolved. That appreciation has made it more beautiful in my eyes."

"Knowing that my research will bring the Australian Age of Dinosaurs to a wider audience is the most rewarding aspect for me ... there are tours running through the lab every day and you see the kids getting so excited."

While studying, Poropat's choices were always influenced by his aspiration to be a Palaeontologist. He completed a Bachelor of Arts and Science; majoring in geography and geology and completing several units of biology. Honours and a doctoral research project with the School of Geosciences followed, where he investigated Foraminifera (microscopic plankton) and ostracods (microscopic crustaceans). The fossils of these aquatic species are commonly used as bioindicators in fossil fuel exploration. Poropat particularly remembers his time as a teaching associate. "Watching students learn, and knowing that you contributed to that process was a good feeling." Meticulous curiosity is critical. He advises aspiring Palaeontologists to network and demonstrate their interest by getting involved with local museums and research. "Acquire knowledge, read a lot.” A Palaeontologist should be curious, observant and meticulous.

When asked what advice he would give to aspiring or young science students, Poropat suggests that students should “engage themselves in as many branches of science as possible. Make the most of your time at university – your lecturers are researchers too, and their knowledge and advice is invaluable”.